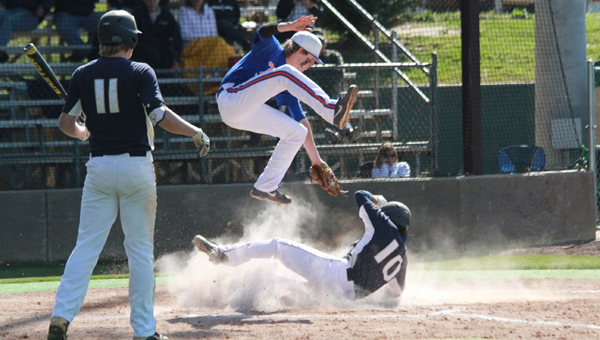 CLANTON – With fans packing the stands and even standing at the fence surrounding the field at Jack Hayes Field, the Chilton County High School baseball team was unable to defend its home turf April 20 and was knocked out of the Class 5A state playoffs by the Briarwood Christian Lions in consecutive games, 15-5 and 6-3.

Both teams started the first inning of game one scoreless, but a four-run inning by Briarwood (16-15) put Chilton County (23-12) in a big hole to start the game.

The Lions added two more runs in the top half of the third inning for a 6-1 Briarwood lead.

The Tigers rallied in the fourth inning with four runs on two hits to trail by one, 6-5, after four innings of play.

The Lions added three more runs in the top half of the sixth while setting the Tigers down in order in the bottom half.

Five walks to Lions batters in the top of the seventh inning would lead in part to six runs for Briarwood, putting the Tigers down 10 runs to take game-one 15-5.

Tanner Cunningham pitched three and a third innings in the win for Briarwood and allowed four earned runs on five hits with a strikeout and two walks. Chandler Wilkins finished 2-for-5 with three RBIs for the Lions. Ethan Simmons added a 2-for-4 effort with three runs scored.

After dropping the first game, the Tigers got started off on the right foot and took an early 1-0 lead in the second game of the doubleheader.

Briarwood scored a run in the second, third and fourth innings to keep pace before breaking the game open in the fifth.

Barnes Bankston pitched seven innings and allowed three unearned runs on seven hits with three strikeouts and two walks. Gann finished the game 1-for-3 with two RBIs while Sam Morris was 2-for-3 with a double and a RBI.

FROM STAFF REPORTS The Vincent Yellow Jackets were one out away from closing out their Class 2A first round playoff... read more