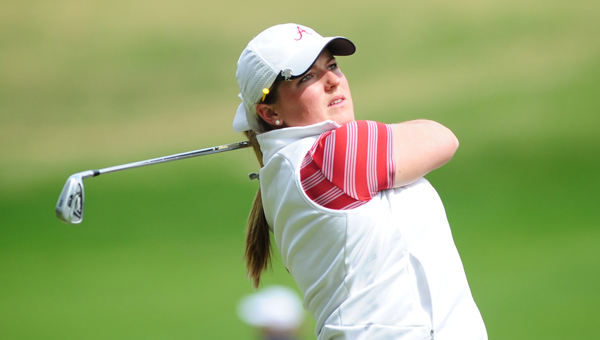 Alabama junior Hannah Collier – a Spain Park graduate – finished in a tie for 14th after winning the third round at the 2013 SEC Women’s Golf Tournament at Greystone’s Founders Course April 21. (Reporter photo/Jon Goering)

Collier finished the tournament in a tie for 14th with a total score of 230 over the three rounds, including a third-round winning score of 71 on the final day of the tournament.

Alabama trailed a stroke to LSU at the end of a wet first round on Friday, but took the lead with a combined score of 293 on Saturday. The Crimson Tide wrapped up the conference title with a 302 on April 21.

Alabama’s Stephanie Meadow took the lead in the individual standings with a 69 during the second round of competition. She added a 72 on the final round to finish the tournament with a 216 and the only player to finish at even par for the three-round event. Meadows led the field with 12 birdies on her way to the win.

FROM STAFF REPORTS MONTEVALLO – Following a one-week absence, the University of Montevallo baseball team is once again ranked in the... read more