Kids run Pelham for a day 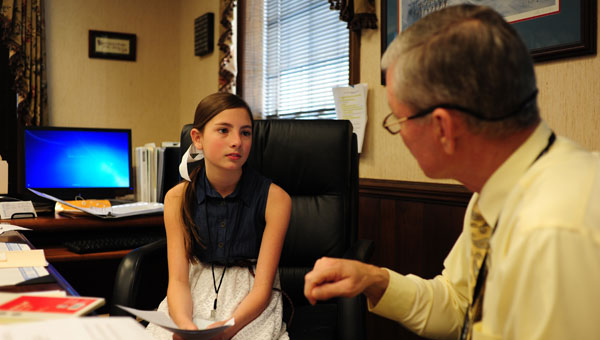 Valley Intermediate School fifth-grader Riley Coston, who was elected by her peers to serve as mayor for the day, speaks with Pelham Mayor Gary Waters in Waters’ office at Pelham City Hall during Youth Government Day April 22. (Reporter Photo/Jon Goering)

Several Valley Intermediate School fifth-graders may have gotten a glimpse into their political or civil service-related futures on April 22, as they got firsthand looks at what it takes to make the city run.

During the first half of the day, about 275 VIS fifth-graders and their teachers visited Pelham City Hall to learn about the city’s government workings. During the visits, the students toured Pelham’s administration offices, library, Revenue Department, court, police and fire departments and public works.

The VIS fifth-graders also recently held a mock election to name a mayor, five City Council members, a Chamber of Commerce president and city department heads from among their peers. The elected department head students then mirrored their adult counterparts for half a day before giving presentations on what they learned during a student-run City Council meeting after the adult council conducted its meeting at 7 p.m.

Xavier Lankford served as city clerk, Addison Watts was the director of human resources, Neil Furman was the city engineer, Zach Johnson was the building official, Jordan Intal was the police chief, Anna Boutwell was the fire chief and Kylie Snyder was the library director.

“We unquestionably learned more today than the students,” said adult Council President Rick Hayes. “We enjoyed hearing all of their thoughts and concerns. They are kids, but they think like adults in so many ways.”

By AMY JONES / Associate Editor HOOVER — An 82-year-old Hoover woman was recently arrested and charged with conspiracy to... read more