Spain Park knocks off No. 1 Thompson 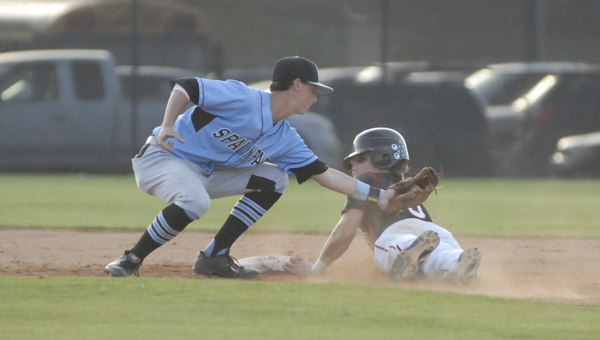 ALABASTER – The Spain Park Jaguars took advantage of a couple big innings to take a 2-1 Class 6A first round playoff series victory over the No.1 ranked Thompson Warriors.

Spain Park jumped out to a 4-1 lead in the first inning of game two, which Jaguars’ head coach Will Smith said was the turning point in the series against Thompson.

“Up to that point (Thompson) had all of the momentum and Trey (Hawker) gave us an opportunity to win,” Smith said. “When you get into a game-three, anything can happen.”

The Jaguars took an early one-run lead in the first inning, and then added a pair of runs on a double by Peyton Walsh in the second for a 3-0 lead.

Thompson (38-10) pulled within a run in the second led by a Heath Haskins’ RBI double for a 3-2 score at the end of two innings.

Spain Park broke the game open in the fourth when they took advantage of having the bases loaded three times in the inning to score six runs on three hits and three walks.

“Guys had good at-bats,” Smith said. “The game plan of the whole series was staying out of the big inning and creating big innings – especially today.”

The Warriors added four unanswered runs on three sacrifice fly-outs and a Spain Park error to close within three, 9-6.

“I’m proud of the year, just not proud of the night,” said Thompson head coach Pat Hamrick. “We just got out-played.”

Parker Hall picked up the win for Spain Park allowing two runs on six hits in three and two-thirds innings of work in relief. Josh Rich finished 2-for-4 with a double, three RBIs and a run scored. Brandon Bilek added a 2-for-4 effort with two doubles.

Mason MacDougall pitched an inning and a third for Thompson in the loss and allowed three runs on four hits with two strikeouts and a walk. Davis Cox led the Warriors with a 3-for-4 effort with two runs scored. Trey Matherson drove in three runs on three sacrifice fly-outs.

The Jaguars advance to take on Pelham on the road in the second round of the playoffs with a best-of-three series April 26.

The Spain Park Jaguars’ Trey Hawker pitched seven innings in a 5-4 victory in game-two of their Class 6A first... read more