Vincent Choir presents “A Tribute to Michael Jackson” May 2 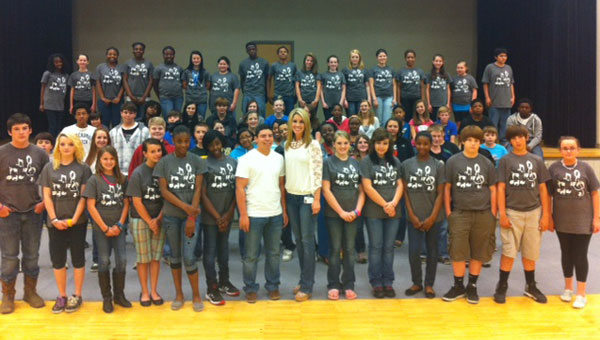 The Vincent Middle and High School choirs are performing “A Tribute to Michael Jackson” Thursday, May 2, at 6:30 p.m. at Vincent High School in the auditorium.

Spates began teaching in 2012 at Vincent and teaches choir to more than 100 students in five classes, sixth through 12th grade.

“This will be probably the biggest performance they’ve ever seen at Vincent,” said Spates. “This is also the first time that the special needs children are in the entire show. They are my heart and are thrilled to be included in the whole show. I just love this job.”

Spates is a classically trained, gifted vocalist and has been singing since age 3 when she first performed a church solo. The daughter of Randy and Selena Spates of Harpersville, Spates attended Vincent Elementary as a child where her mother was the bookkeeper. She received her bachelors of arts in music from Samford University and is a former Miss Shelby County.

The concert will perform Jackson’s favorites “Thriller” and “I’ll Be There” and other well-known songs.

The choreography was created by Spates. Special needs student Josh Thomas will be dressed as Michael Jackson. The band will perform with the choir the song, “Heal the World” at the end of the performance.

Come for a great night of entertainment May 2 at Vincent High School located on Alabama 25 in Vincent.

Phoebe Donald Robinson is a community columnist and can be reached at phoeberobinson@bellsouth.net.