Dan and Mary Madrigal, of Red Bud, Ill., are proud to announce the marriage of their daughter, Leah Madrigal, to Darren Sahadew of Halesowen, West Midlands, United Kingdom. Darren is the son of Hilary and Raj Sahadew. 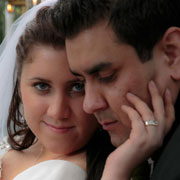 Groom attendants included Jay Baker from Kingswinford, United Kingdom, along with Nick Andrew and Paul Russell from the United Kingdom.

The bride carried a beautiful bouquet of miniature ivory roses with sangria and teal carnations. Her dress was a Tiana Princess wedding dress designed by Alfred Angelo.

Leah and Darren were married on March 29, 2013, at 2:30 p.m. in The Conservatory in St. Charles, Mo. The couple will be making their home in Halesowen, West Midlands, United Kingdom.