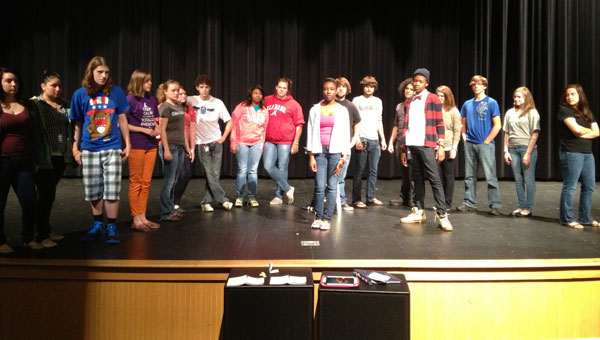 “The Cop and the Anthem” is an O. Henry story about Lemuel T. Thwackbusher, a homeless man in New York, who has an unusual problem. Each year when winter starts, he gets arrested to avoid the cold winter. But this year, no matter what he does, he is not successful. Thwackbusher commits humorous misdemeanors and begs to be locked up. The surprise ending is true of O. Henry’s writing style.

“The Lottery” is a short story originally published in the New Yorker Magazine. It is the only drama of the three performances. The story takes place in a small farming community where the people are close and tradition is foremost. A yearly event, called the lottery, is one in which one person in the town is randomly chosen by a drawing… but for what?

“The Great Pandemonium” is a story about the crazy confusion that ensues during the dreaded technical rehearsal for a high school production of Richard III. A meddling principal, a drill sergeant for a stage manager and unwilling cast members drive their drama director over the edge.

“I have really challenged the students this semester giving them a quick deadline for performances,” Lagrone said. “They are so talented and I know they will not let their audiences down. There is a lot of hard work going into these plays and it will show.”

Mollie Brown is a community columnist and can be reached at dmjhb1@bellsouth.net.

It’s that time of the year… Strawberry time!

By MOLLIE BROWN / Community Columnist Can you name a fruit that has its seeds on the outside? If you... read more