Local author encourages kids to do what they love 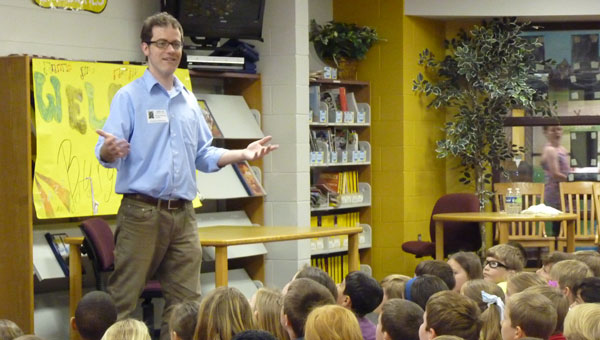 GREYSTONE — Author Burgin Mathews remembers what it was like to be in elementary school. When he was in those early grades, he was already cultivating a love of writing — the subject of his talk with Greystone Elementary third-graders April 24.

“Everybody’s a writer,” Mathews said to a library crowded with students.

Mathews, the author of “Doc: The Story of a Birmingham Jazz Man” and an English teacher at Spain Park High School, told tales of growing up with his friend, Richie, and how the two of them wrote stories and comic books together from a young age. In high school, the two were part of a literary magazine, and now Mathews writes books while Richie writes for movies and TV, including the hit show “iCarly.”

“We wrote just for fun. That sort of becomes who you are,” Mathews said.

Mathews asked the students to give examples of what they love to do, and they shouted out answers such as “golf,” “baseball” and “singing.”

“Everybody has something that you love to do,” Mathews said. “Why did I want to write books? Because it’s what I love to do.”

Mathews encouraged the students to stick with what they love, even if it sometimes gets boring.

“Sometimes I get tired of writing for a little bit, but I always get back to writing,” he said. “Writing is frustrating, but anything you do is frustrating so keep doing it anyway.”

“Doc: The Story of a Birmingham Jazz Man” is about Doc Adams, an 86-year-old jazz musician who has played jazz in Birmingham all his life. Mathews said through Doc’s stories, he hoped to help trace the history of music in the Birmingham area.

“People should know that Birmingham is an important place for music,” he said.

Mathews said he accomplished writing the book by doing weekly interviews with Doc Adams for two and a half years. He’s currently taking a break from writing, but hopes to begin work on another book soon.

“Everybody is a writer, even if they don’t write books,” he said.