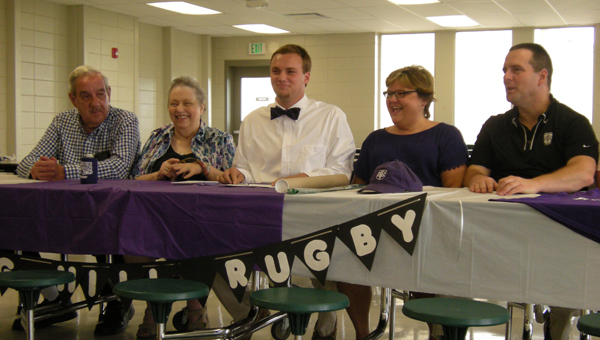 PELHAM – Most high school seniors don’t make school history – much less state history – when they sign a college scholarship. On the other hand, most seniors are not like Pelham’s Connor Wilkins.

Wilkins became the first senior in the state of Alabama to sign a rugby scholarship when he signed with Spring Hill College.

“He’s undeterred to be told no,” said Pelham head soccer coach Patrick McDonald. “He’s always been ok and accepting to try something new. I’m very happy for him and very glad that he was given this opportunity by Spring Hill.”

Wilkins began playing rugby three years ago after first learning about the game at the Birmingham Vulcans Rugby Football Club. Although he couldn’t immediately participate, Wilkins attended practices and eventually competed with the Vulcans.

When asked to describe the game of rugby, Wilkins said the sport is a blend of soccer and football – both of which he played at Pelham High School. He is a starting forward for the Pelham varsity soccer team and played football as a freshman.

“A lot of people think that the sport is brute force, but it’s a really fun sport,” said Wilkins. “You are constantly moving so you have to be in shape. It just seemed right because out on the football field I was a lot more in shape than a lot of kids and on the soccer field I was always a little bit bigger.”

Wilkins said signing a scholarship “means a lot”, especially after an up-and-down experience deciding on where to go to school. He was looking for somewhere to play rugby, but that school fell through. He then decided on another college and even applied for housing and that didn’t work out either. That is when Spring Hill became the focus of his search.

“It was a surprise almost,” Wilkins said on signing with Spring Hill. “A day after I tried to submit my housing that didn’t work out, Spring Hill called and offered me a scholarship for rugby. I was one of the top prospects they had.”

Spring Hill has offered rugby since 1969, but will move forward to field a varsity team.

“They are trying to get on the forefont for Olympic rugby,” said Wilkins.

Although he has only played rugby for fewer than five years, McDonald said he knows Wilkins will succeed at Spring Hill.

“Conner is the embodiment of a student-athlete,” McDonald said. “Not only is he academically sound, but athletically his skills carry across the board to multiple sports. While he picked up rugby maybe later than others have, he was able to make that adaptation pretty well.”