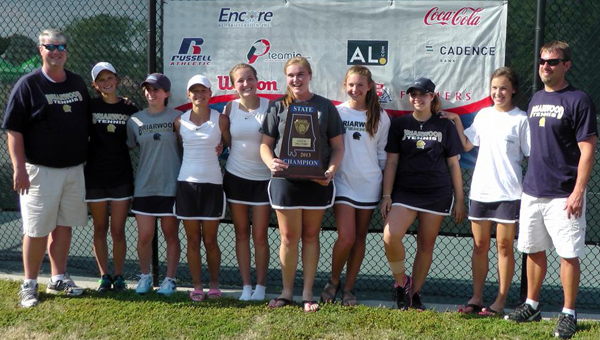 Briarwood’s Ashley Ochsenhirt won the No. 1 singles state title with a 6-4, 1-6, 6-4 victory over Muscle Shoals’ Sydney McKinney as the No. 9 seed in the state tournament. Jud Tarence won the No. 2 singles championship with a 6-3, 6-1 victory over Homewood’s Maggie Williams.

Ochsenhirt and Tarence won the No. 1 doubles state championship with a 6-4, 6-4 victory over Cornelius and Bussman from Cullman.

Olivia Odom and the pair of Henderson and Frannie Ware each advanced to the state semi-finals in the No. 6 singles and No. 3 doubles brackets respectively.

Briarwood finished with a team-total of 65 points with St. Pauls taking second with a score of 50.

The Briarwood Christian boys’ tennis team finished seventh in the team standings in the boys state tournament, and won the sportsmanship award which is voted on by competing teams in the tournament.