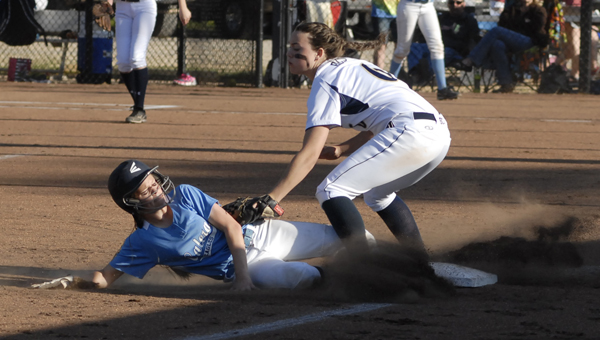 The Eagles (24-10-1) took a 2-1 lead after the first inning, but Briarwood responded in the second inning. Morgan Reed gave the Lions the lead with a 2-run double to left and scored on an Amelia Moore bunt single to give Briarwood a 4-2 lead.

Calera pulled within one in the third when Shelby Clark scored on a Charley Clark sacrifice fly before regaining the lead with a big fourth inning. The Eagles loaded the bases with two outs and Charley Clark came up big for Calera with a 2-run single down the third baseline and Skylar Laird followed with a 2-RBI single of her own for a 7-4 Eagles’ lead.

Briarwood (19-9) battled back in the bottom of the fourth with two outs. Reed and Rachel Walz each hit triples to lead the Lions to a 3-run fourth to even the score 7-7.

The tied score stood through the seventh inning forcing extra innings. The eighth inning began with the Eagles’ starting with a runner at second base with the international tiebreaker rule in effect. Somer Roberson drove in the runner with a double to left to give Calera an 8-7 lead.

Briarwood was able to move the runner to third on a sacrifice bunt and Reed followed with a sacrifice fly to center to tie the score 8-8 to send the game into a ninth inning.

Calera’s Kymber McGiboney hit an RBI triple to right and scored on a single by Charley Clark to give the Eagles a 10-8 lead.

The Lions moved the runner to third to begin the Briarwood ninth inning and scored on a Calera error to cut the deficit to one, 10-9. Calera held on to the lead when the final Briarwood batter popped up to first to give the Eagles the 10-9 victory.

Charley Clark finished the game 3-for-4 with four RBIs to lead the Eagles and McGiboney went 2-for-4 with a triple and an RBI.

Reed led Briarwood with a 3-for-3 effort with two doubles and a triple with an RBI. Walz went 2-for-4 with a triple.

Reed took the loss for the Lions allowing three runs on five hits with two strikeouts and a walk.

FROM STAFF REPORTS INDIANAPOLIS, Ind. – The University of Montevallo baseball team is ranked No. 8 in the initial NCAA Division... read more