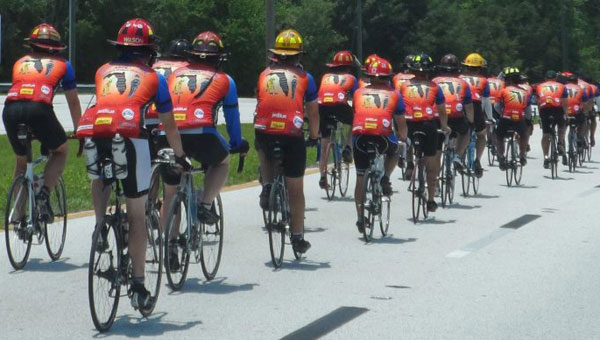 Sixth annual Brotherhood Ride will come through Calera May 8. (Contributed)

Who doesn’t love a parade? Calera has at least two each year. Parade watchers throng storefront sidewalks on main street to see beauty queens, catch candy thrown from floats and wave to Santa.

A different type of parade will take place May 8. The Sixth Annual Brotherhood Ride will travel through Calera and stop at the Calera Elks Lodge. The Brotherhood Ride Organization was founded by first responder Bonita Springs, Fla., Elks Lodge President Jeff Morse, following a tragic event that involved firefighters in Charleston, S.C. in 2007.

The Brotherhood Ride cyclists consist of firefighters, police officers and emergency medical personnel from across America who honor their brothers that lost their lives in the line of duty. They provide emotional and financial support to the families to show those who made the ultimate sacrifice are not forgotten.

This year’s ride is dedicated to five police officers and one firefighter from Florida, a Virginia police officer and a fire chief from Tennessee, who died in the line of duty in 2012. Cyclists will begin the ride May 3 in Brooksville, Fla., travel through Alabama and end their journey in Decaturville, Tenn., on May 11 covering more than 700 miles in nine days.

The cyclists’ estimated time of arrival in Calera is 4-5 p.m. They will enter south Calera on U.S. 31 N, continue through downtown Calera, turn left on Eighth Avenue, turn left on 18th Street, then right on 10th Avenue/Pilgreen Drive and proceed to the Calera Elks Lodge.

“We are providing overnight accommodations, dinner and breakfast the following morning before their departure,” Calera Elks member Debbie Ray said. “Our Alabama Elks president will be at the dinner and we’ve invited city officials and our police and fire departments to join us. We are grateful for the Calera, Alabaster and Chelsea businesses who have made donations for the event.”

The Elks is a community service organization, which focuses on youth and veterans. Calera Elks support the Calera community little league and youth football programs, sponsor families at Christmas and support various non-profit organizations. Ray added the lodge will not hold its Memorial Day BBQ this year.

Mollie Brown is a community columnist and can be reached at dmjhb1@bellsouth.net.