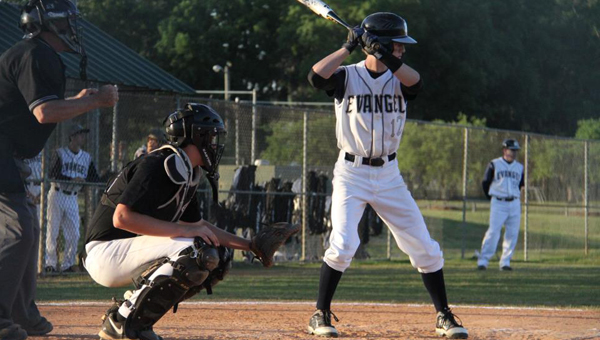 Evangel Christian’s Andrew Thompson went the distance while scattering seven hits and giving up just one earned run to lead the Lightning to an 11-5 win over Evangel Family Christian Academy of Montgomery in the finals of the Alabama Christian Sports Conference baseball tournament April 26.

The Lightning, who won the ACSC regular season championship, swept through the tournament without a loss.

Brandon Mackey, Ben Albright, Nate Scott and Colin Myers each had two hits to pace Evangel’s lethal attack at the plate. The Lightning scored 39 runs in the three tournament games.

Thompson was named the tournament MVP. Mackey, Albright, Scott and Josh Letson joined Thompson on the all-tournament team for Evangel.

Top-seeded Evangel Christian won its first two games of the Alabama Christian Sports Conference baseball tournament on April 25 to advance to the championship game. Evangel, which won the regular season conference title and received a first-round bye in the tournament, beat Tuscaloosa Home 16-0 in the second round game. The Lightning and then overcame an error-plagued performance in the field with hot-hitting to knock off defending conference champion Evangel Family Christian Academy of Montgomery 12-7.

Ben and Jacob Albright combined on a five-hit shutout against T.H.E. in the five-inning game, shortened by the 10-run rule. Ben Albright and Andrew Thompson each had two hits and two RBI and Josh Letson also had two hits for Evangel.

The Lightning jumped out to a 2-1 lead, before a series of errors in the third inning led to four EFCA runs and a 5-2 deficit. Evangel heated up at the plate and scored 10 straight runs over the next few innings to go up 12-5. Thompson had three hits with Josh Letson, Nate Scott, Ben Albright and Brandon Mackey each adding two hits to lead the way for Evangel. Letson went the distance on the mound to earn the victory.