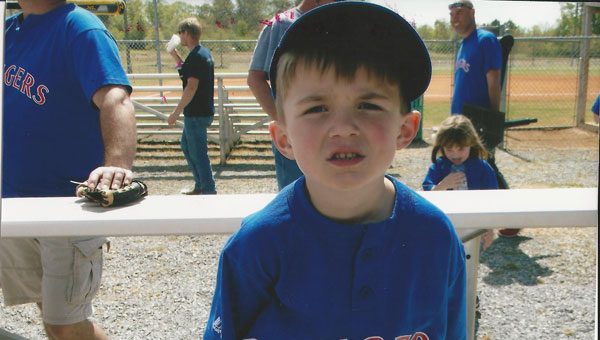 Five-year-old Leighton, above, was the inspiration for a recent Autism Walk organized by his grandmother Jo Leigh Marlow. The walk brought out 80 walkers. (contributed)

Last spring, after writing about Chelsea 9-year-old Matthew Devenyns, and his family’s experiences with Matthew’s autism, I began receiving emails from family members of children with the disease.

One email was from Jo Leigh Harlow, a sixth-grade teacher at Vincent Middle School, and grandmother of Leighton, a then four-year-old with autism.

Jo Leigh said she hopes to use her training and experience in music and teaching to begin a music class for autistic children.

This spring she organized an “Autism Walk,” to help promote awareness of autism and the growing number of children and families affected by it.

Vincent donated use of the park, she said, and she did promotion using flyers, school marquis, Facebook, word-of-mouth, and numerous hours at the ballpark.

For several years Beta Club members have participated in Autism Walks as a service project, she said. So they were well-versed in how to hold such events. Along with the two-mile walk, they had a space bounce, face painting, baked goods, snow cones — and T-shirts for 75 of the 80 participants, with more ordered after running out.

Jo Leigh said mothers are talking about making the walk an annual event.

Vicki Devenyns of Chelsea, mother of Matthew, said she didn’t know about this year’s Walk, but wants to participate next year, adding she has found that playing outside in the sunshine is good for these kids.

According to a 2012 U.S. Centers for Disease Control and Prevention (CDC) report, one in eighty-eight children had autism, while the daily web newspaper Age of Autism (Ageofautism.com/2013) reports that a 2013 CDC study found the autism rate among American children now one in 50.

“Autism has a very special place in my heart,” said Jo Leigh, “Not for just Leighton, but all of the children I teach, have taught, and will teach in the future. Hopefully, one day, they will find a cause and a cure for this growing disease.”