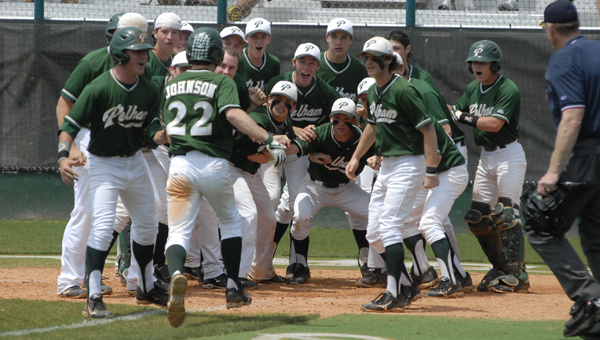 PELHAM – The Pelham Panthers fought back from deficits in the first and third games of their three-game second round Class 6A playoff series to take a 2-1 win over the Spain Park Jaguars.

The Panthers rallied from four runs down in the seventh inning to take a 6-5 game one victory and sealed up the series win with a 9-1 game three win April 27.

“Spain Park is an unbelievable team that is well-coached,” said Pelham head coach Sean Anderson. “We are just fortunate that we were able to play today.”

In the first game of the series on April 26, the Jaguars took control after both teams battled for a 1-1 score after four innings when Grant Veteto hit a 2-run home run to lead the Jaguars to a 4-1 lead.

Spain Park added a run in the sixth on a McDonald RBI single to take a 5-1 lead headed into the seventh inning.

Pelham answered in the seventh led off by a Chase Brashier single. The Panthers loaded the bases on a walk and a hit batter, and then Fletcher Johnson hit a single to left to score Brashier for a 5-2 score with one out. A walk to Alex Urban scored a run and the Panthers drew within a run when Kolby Booth scored on a wild pitch. Eli Beall tied the game with a fielder’s choice that scored Johnson and Jackson Pruitt drove home the game-winning run on a sacrifice fly to give Pelham a 6-5 victory in game one.

Tyler Payne picked up the win while pitching an inning and two-thirds in relief. Johnson finished the game 3-for-4 with two doubles and an RBI while Urban was 1-for-3 with a double and two RBIs.

It was Spain Park’s turn to mound the comeback in game two, as the Jaguars were able to even the series and force game three on April 27. The Jaguars scored three unanswered runs to take a 6-3 game two win.

“There are no quit in these guys,” Spain Park head coach Will Smith said on the game two win.

Trey Hawker pitched seven innings in the win for Spain Park and allowed three runs on five hits with three strikeouts. Dalton Brown led the Jaguars with a 1-for-3 effort with two RBIs.

The Jaguars took control of game three early when Josh Rich scored on a passed ball to give Spain Park a 1-0 lead.

Spain Park carried the lead into the top of the third when Pelham’s offense came alive. The Panthers had runners at first and second when Johnson hit a home run well over the left field fence to give Pelham a 3-1 lead and the momentum after four innings.

Pelham added a run on the fifth, two in the sixth and three more in the seventh all the while holding Spain Park to just three hits to take the 9-1 victory to seal the series.

Sam Finnerty pitched all seven innings for the Panthers and allowed one run on three hits with three strikeouts and a walk. Johnson led Pelham while batting 3-for-5 with a home run and three RBIs.

Matt Berler took the loss for Spain Park while allowing two runs on four hits in three and a third innings of work. McDonald hit a double in a 1-for-3 effort for the Jaguars while Josh Close and Veteto each added 1-for-3 performances.