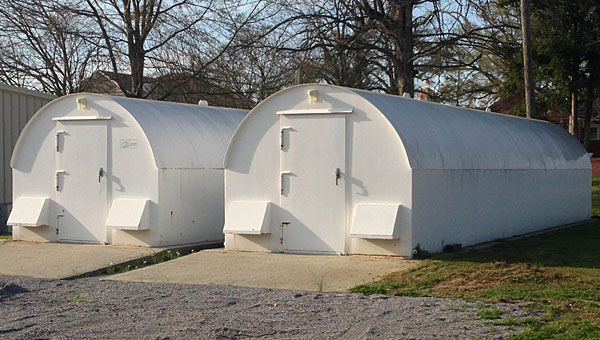 The Pelham City Council voted during its April 29 meeting to turn down a FEMA grant aimed at bringing five storm shelters to the city. (File)

The Pelham City Council voted unanimously during its April 29 special-called meeting to turn down a Federal Emergency Management Agency grant to bring storm shelters to the city after city leaders expressed several concerns over the grants.

If approved, the FEMA grant would have totaled $802,510, and would have required a $312,979 city match – much larger than the $162,500 match the city quoted when it applied for the grant in 2011. The grant would have funded five storm shelters in the city: Two at Pelham City Park and one each at the Pelham Senior Center, Fungo Holler Park and the Pelham Civic Complex.

During the April 29 meeting, Pelham Mayor Gary Waters said the grant would have required the storm shelters to be placed on city-owned land.

“The provisions of this storm shelter grant are so rigid that we are not even able to put (the storm shelters) where they are needed. The strings that come from Washington are more like cables,” Waters said. “This is a matter of this body spending appropriately and effectively the taxpayers’ money.”

Councilman Ron Scott previously said the storm shelter at the Civic Complex would have blocked a large portion of the facility’s parking, and would have prevented future expansion of the complex.

In his comments during the meeting, Waters criticized local television news outlets’ recent coverage of the storm shelter grant issue.

“I’m not the least bit enamored by the way this topic has been framed in the television media,” Waters said as several television cameras lined the back of the room. “I resent the implication that by the city opting out of a bad grant, we automatically put the citizens of Pelham in a dangerous situation.”

Waters said city facilities such as the basement of City Hall and the basement of the Pelham police and court building are open to residents who need shelter during inclement weather.

“We will never turn anyone away,” Waters said.

During the meeting, the council also voted down a federal grant aimed at funding landscaping along Ball Park Road through Pelham City Park.

The council agreed to reimburse the Vision Landscaping company $863 for work the company has already done on the grant. Council President Rick Hayes said the city is planning to spend the $14,000 it would have used to match the landscaping grant to instead purchase a litter-pickup vehicle to be used along the city’s roads and medians.