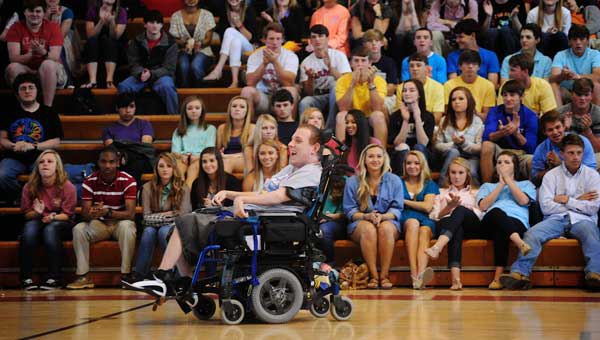 Josh Carden wheels out onto the Thompson High School gym floor during an assembly on April 26. (Reporter Photo/Jon Goering)

A little more than two years ago, Thompson High School students set a goal to raise $1,000 for fellow student Josh Carden, whose grandfather had died recently.

Instead, they raised almost $13,000 in four days, and sparked a community-wide effort to assist Carden, who has cerebral palsy and uses a motorized wheelchair, and his grandmother by building them a new home. On April 25, the Alabaster community celebrated the completion of Carden’s home and honored the efforts made by the students and other community members during a presentation at THS.

THS Principal Dr. Danny Steele told the students their actions served as a catalyst for the community.

“Something took off that was known as the Josh Carden Project, that not just brought our entire student body together but the entire community of Alabaster,” he said. “It is a testament of what we can do to make a difference, and that’s what it’s all about.”

“Thompson, you decided to take a dark tragedy and turn it into something … brighter,” he said.

The Josh Carden Project got its start when Carden’s grandfather, Tommy Pickett, was struck and killed by a car while helping him exit a school bus in December 2010. Following the tragedy, THS students set a fundraising goal to assist Carden and his grandmother, Louise Pickett.

The effort soon spread to the Alabaster community. Volunteers originally planned to renovate Louise Pickett’s home, but instead they decided to build a new home better suited to Carden’s needs.

Carden and Louise Pickett moved into their new home in the winter of 2012. Brooks shared a video of Carden visiting his new home for the first time during the presentation.

Brooks also introduced members of the North Carolina-based Let Your Life Speak Foundation, which worked with The Josh Carden Project. The foundation also commissioned a statue commemorating the students’ efforts that was revealed during the presentation.

“The industrial look of the sculpture represents the beginning, the ground floor and the bringing together,” sculptor Catherine Griffin said. “The metal rings represent a ripple effect. One individual caring enough to take action, then to engage others in that action and continuing on and rippling out. The rings also are interconnected and that symbolizes unity.”

Water will flow from the top of the statue, which will be placed on the school grounds.