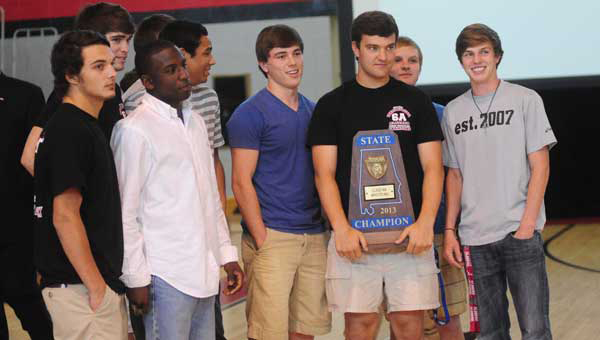 Senior members of the Thompson wrestling team stand for pictures with their 2013 AHSAA Class 6A State Championship trophy during an assembly on April 26. (Reporter Photo/Jon Goering)

The Thompson High School wrestling team was presented with the 2013 Alabama High School Athletic Association state championship trophy during an April 25 presentation at the school’s gymnasium.

AHSAA Director Steve Savarese said the team’s commitment to excellence was the key in securing the state title, which the Warriors have won for the last three years.

Ron Ingram, AHSAA director of communications, was also on hand for the trophy presentation.

The Warriors’ wrestling program began six years ago. They won their first championship in 2011 with 154 points and their second championship in 2012 with 231.5 points, which set an AHSAA Class 6A record. This year, the Warriors won 196 points, and all wrestlers who qualified scored points.

“That spark in 2008 that started this program is now a raging flame,” Ingram said.

Head coach Shawn Weltzin said he was proud of the team, and they are already gearing up for the 2013-2014 season.

“Hopefully, we can pull it off again next year,” he said. “The (seniors) would be the first class in history to have a ring for every year.”