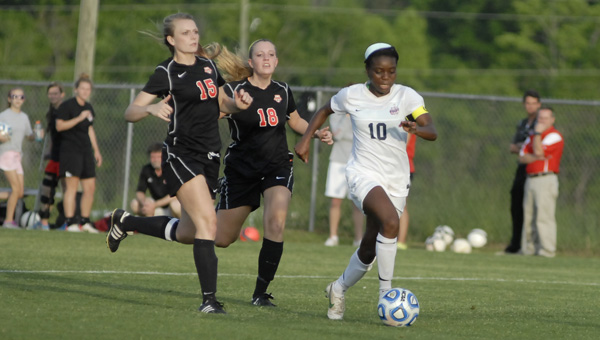 NORTH SHELBY – Oak Mountain senior forward Toni Payne provided all the offense the Eagles needed to advance into the third round of the Class 6A state playoffs with a 2-0 victory over the Thompson Warriors April 30.

Payne scored both goals for the Eagles – on with less than 15 minutes to go in the first half and another with 17 seconds left in the game.

“That’s what is expected of Toni,” said Oak Mountain head coach Pete Dakis. “This is what Toni is. She plays hard every game and just taking care of business for us.”

Dakis said that he had several younger players contribute to the win in addition to Payne’s performance.

“We have a lot of young players in there that stepped up and played pretty consistently against a good team like Thompson,” he said.

The Warriors (15-9-1) focused on containing Payne for the first 20 minutes of the game, which had been the game plan for all of their matches against Oak Mountain.

“(Payne) is a good player and we know that,” said Warriors’ head coach Nathan Button. “We thought going in we would mark her and could get away with not marking her.”

Button said that he felt that his team was still in the game after trailing a goal at the half and could take advantage in the second half. The Warriors had several scoring chances in the second half with 10 minutes to play, but were unable to capitalize.

“When we are determined to play, we can play with anybody,” Button said on his team in the final minutes of the game. “We just didn’t play 80 minutes today. Our goalkeeper kept us in it and every pushed up to get that goal. We just fell a little short.”

Oak Mountain (20-3-2) advances to the third round and will travel to Auburn May 4.

Spain Park knocks off No. 1 Thompson

Spain Park second baseman Matt Berler puts a tag on Thompson’s Davis Cox as he slides into second in the... read more