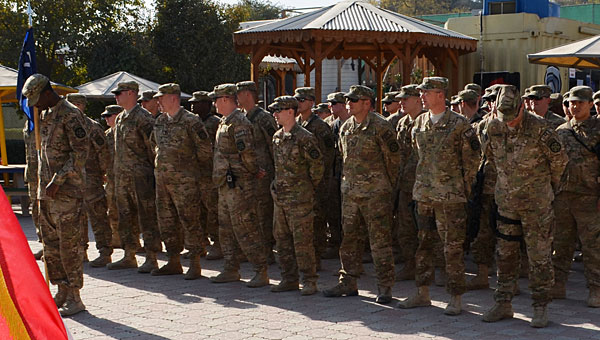 The Pelham-based Bravo Company of the 1/167th Infantry Division of the Alabama National Guard conducts a transfer of authority ceremony at Camp Eggers in Kabul, Afghanistan, marking the end of its deployment. The company is preparing to return to the United States. (Contributed)

More than 120 soldiers serving with Bravo Company of the 1/167th Infantry Battalion of the Alabama National Guard are preparing to return home after completing their nine-month mission in Afghanistan on May 1.

During a transfer of authority ceremony at Camp Eggers in Kabul, Afghanistan, the company cased its colors, “signifying the end of its operations in support of Operation Enduring Freedom,” according to a National Guard press release. The 1/167th transferred mission control to the Guam-based 1/294th Battalion during the ceremony.

Over the past nine months, the Pelham-based Bravo Company was stationed at a forward-operating base in Kabul, and completed “nearly 3,850 missions, safely moved approximately 16,500 personnel and traveled more than 50,200 demanding miles,” according to the National Guard.

Bravo Company’s missions were in support of the NATO Training Mission-Afghanistan, which is seeking to train Afghan forces to assume control of the nation’s security by the end of 2014.

“The company’s responsibilities included providing personal security and maneuver capability for several general officers in support of NATO Training Mission-Afghanistan, as well as trainers, advisors and even the secretary of defense and the chief of staff of the army on occasion,” according to the National Guard.

Bravo Company 1st Sgt. Stephen Prior said the company experienced several enemy engagements during its deployment, but none of its soldiers were seriously injured.

“Bravo Company has displayed great resiliency by successfully adapting to a difficult mission set,” Prior wrote in the release. “During this deployment, Bravo Company soldiers demonstrated their ability to conduct operations independently with minimal guidance.”

Bravo Company, one of six companies making up the 1/167th Infantry Battalion of the Alabama National Guard, deployed in June 2012.

The company will now return to the United States to complete demobilization before returning to Alabama. A public welcoming celebration is being planned for the company, and will be announced at a later date.

The Alabaster Board of Education approved engineering studies of all Alabaster school buildings during its May 1 meeting. (File) By... read more