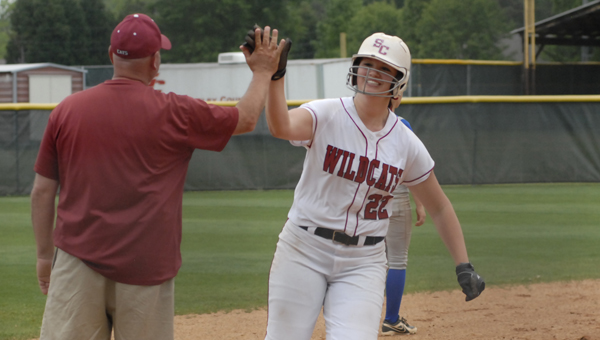 COLUMBIANA – The Shelby County Ladycats softball team punched their ticket to the South Central regional tournament with a 5-0 win over Chilton County to win the Class 5A, Area 8 tournament May 1.

Anna Morgan Couch pitched seven scoreless innings and allowed just three hits with three strikeouts to pick up the win for the Ladycats.

Shelby County advanced to the championship game with an 11-1 win over Chilton County in the second round of play led by Kaitlyn Paschall. Paschall finished 3-for-3 with two home runs and four RBIs while pitching six innings and allowing a run on one hit with three strikeouts and three walks. Buie added a 2-for-4 with a double and a home run with three RBIs.

The Ladycats opened the area tournament with a 16-1 win over Talladega. Carden pitched four innings and allowed a run on two hits with eight strikeouts. Buie led Shelby County with a 2-for-4 effort from the plate with a double, home run and three RBIs. Sara Catherine Nash finished 1-for-2 with a double and five RBIs.

Shelby County will take on the Area 7 runner up at the South Central regional tournament in Troy.