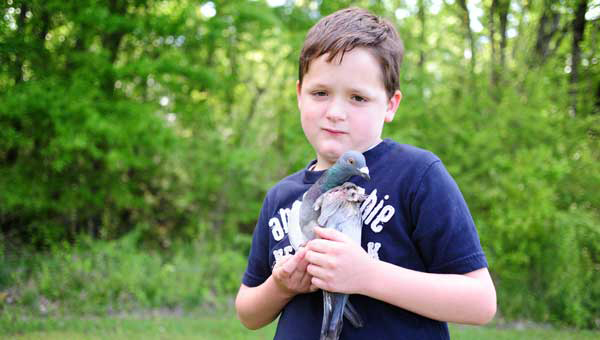 Ryder Cadenhead, who has helped his mom, Angela Shearer-Cadenhead take care of the injured bird, holds it close to where it was found in Columbiana. (Reporter Photo/Jon Goering)

It’s safe to say that in life, we all get lost. We all lose sight of where we are from, where we are currently, and where we hope to end up. Home becomes a distant beacon of yesterday, and tomorrow becomes shrouded in doubt.

Everyone can use a helping hand when they’re lost, even an animal known for its ability to find its home.

When Wilsonville’s Angela Shearer-Cadenhead and her son Ryder saw what appeared to be an injured bird on the side of the road in Columbiana, they had no idea what a story they were about to uncover.

“We saw something on the side of the road that looked like a bird over by the Masonic Lodge,” she said. “I saw it was a pigeon; I saw it wasn’t moving and saw it had bands on its legs.”

As she picked up the bird to take it home, the inscription on the bands caught Cadenhead’s eye. The inscriptions read “Lake Mexia Lofts,” “August 2012” and “129.” After a little online research, Cadenhead discovered the International Racing Pigeon and website and soon found the name of the bird’s owner.

Racing pigeons were originally called homing pigeons, which were brought to the U.S. in the late 1800s. They were used extensively in World War II, and have in recent years been trained to compete in races, which measure which bird travels a set distance and returns in the fastest speed. The birds are known for their inate ability to find their exact point of origin.

There she got in touch with Albert Alaminski, a Texas man who raises racing pigeons as a form of therapy.

“The pigeon I found, he raised her,” Cadenhead said. “He sent this pigeon to Tupelo, Miss., where a seventh grade class was racing her. [We] think a hawk got it.”

Once she brought the bird home, Cadenhead, who is a nurse at UAB, set out to bring it back to health.

“I found out how to set the wing,” she said. “[She] actively bled for a day and a half. I cleaned the wound and applied antibiotic ointment.”

Her attempt to keep the injured wing stable proved to be tough on the bird.

“I didn’t realize the wrap made it so off balance,” she said. “I would leave her, and come back and she would have it off.”

While the bird’s racing days are over, it looks as if it will make a full recovery and will lead a long life. Cadenhead and her son will send the bird back to Alaminski through the U.S. Postal Service. In return, he will send them some birds to take care of.

“[She] looks much better,” she said. “I have her at home in a medium-sized dog cage. Albert wants her back, and plans to breed her. It’s a pretty bird; it had just started racing and would have only gotten better.”

While it seems that Cadenhead’s efforts are above and beyond the call of duty, she simply shrugs the notion off.

“I can’t imagine someone not stopping,” she said. “She’s really sweet. I’ll hold her and rub under her beak, and she’ll kind of bury her head in my shoulder.”

The Pelham-based Bravo Company of the 1/167th Infantry Division of the Alabama National Guard conducts a transfer of authority ceremony... read more