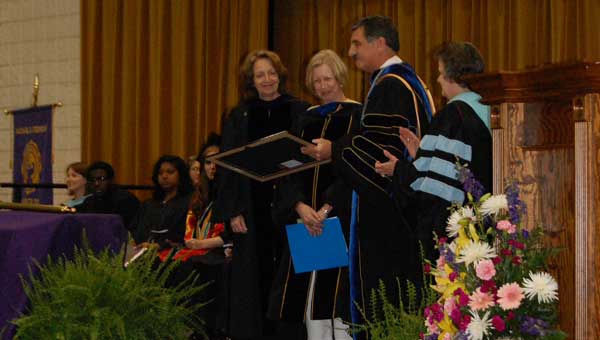 The University of Montevallo’s Class of 2013 marked the “end of a chapter” during spring commencement May 4 at the McChesney Student Activity Center.

More than 300 students received diplomas during the ceremony, and the center was packed with their family and friends.

Student Government Association President Ashley Lowe said the university doesn’t produce “cookie-cutter graduates,” but provides students with “unconventional wisdom” for the next chapter in their lives.

Guest speaker and best-selling author Cassandra King, who has written five novels, reflected on her own experience at UM during her address to the students. King received a bachelor’s degree in English from UM in 1967, when it was Alabama College, and a master’s degree in English in 1988. She also received a doctor of letters degree during the ceremony.

King shared the story behind her book “The Same Sweet Girls,” which was inspired by the group of friends she made in college. Before the women met, King said she had felt out of place at the school.

“The stirring of something I was later to recognize as feminism was very deep in my subconscious, but I had no way of articulating it at the time,” she said. “I knew I didn’t fit in with the beauty queens and sorority sisters who filled the dorms of my college, but I had no idea where I belonged instead.”

King met the women who would become the “same sweet girls” during a mandatory speech during her freshman year.

“On this life-changing day our speaker was a senior, a beauty queen who gave a talk about her reign as the National Maid of Cotton,” King said. “She was a stunningly beautiful, poised and gifted speaker, but it was her final line that got my attention. In a honeyed Southern drawl, she assured her audience that although she had been around the world, had met with kings and queens and heads of state, she was still the same sweet girl she’d always been.”

King said she laughed at the comment and was surprised to see several other students laughing too. The students were “the beauty queens, the campus leaders and sorority girls” that King hadn’t felt a connection with.

“It was at that moment that we dared to laugh at ourselves and each other that I realized kindred spirits had been on campus all along,” she said. “Unknowingly, I had been surrounded by irreverent soul mates disguised as belles in training.

King, who said the friends still hold annual reunions in Destin, advised the students to take advantage of every opportunity that is offered to them.

“On that day, class of 2013, the ‘same sweet girls’ were just a few years younger than most of you are today and we had much to learn. Most obvious is found in the story of how we connected with each other,” she said. “Sometimes life offers us only a moment and we have to be ready for it. We have to be open to it.”