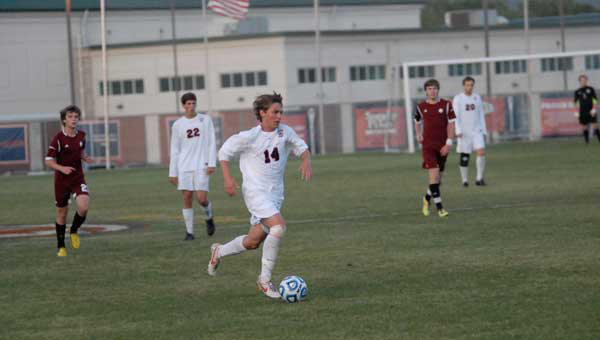 Oak Mountain’s Patrick Carroll advances the ball up the field in the Eagles’ 4-0 win over Prattville on May 4. (Reporter photo/GRAHAM CARR.)

By GRAHAM CARR/Special to the Reporter

The Oak Mountain Eagles soared past the Prattville Lions 4-0 advancing to the semifinals of the AHSAA Class 6A soccer state playoffs.

On a chilly Saturday night at Oak Mountain, the Eagles’ defense froze the Lions’ offense all night, never allowing the Lions to get into any sort of a rhythm. Prattville was limited to only three shots-on-goal opportunities.

“To go through the season and only give up one goal at home is amazing,” Eagles coach Ryan Patridge said. “That is the first time that has been done.”

Patridge said Prattville is always a tough opponent, but his team played well.

“I am proud of my boys,” Patridge said.

For most of the first half both offenses were held in check, but the stalemate was broken when Oak Mountain’s Hayden Ellis broke away from the Lions’ defense and fired a shot into the goal to give the Eagles’ a 1-0 lead, with just under a minute left in the opening half.

The Eagles carried the momentum from Ellis’ goal into the second half, as Patrick Carroll added another Eagles’ score less than five minutes into the final period.

Mills Sproull added the final two Eagles’ goals at the 18:51 and10:36 marks of the final period.

The referees had a busy night as Oak Mountain received two yellow cards, while Prattville received three yellow cards and one red card.

Patridge said the Eagles will game plan some for whoever their next opponent will be, but most of the team’s preparation will be self-evaluating and getting injured players healthy.

“It is all about being ready mentally from a soccer standpoint,” he said.

He added his team will lean on its seniors, who have been to the semifinals three times before, to lead.

In his last home game as Eagles’ coach, Patridge said he was a little emotional, but he was proud of what Oak Mountain had accomplished in his time as coach.