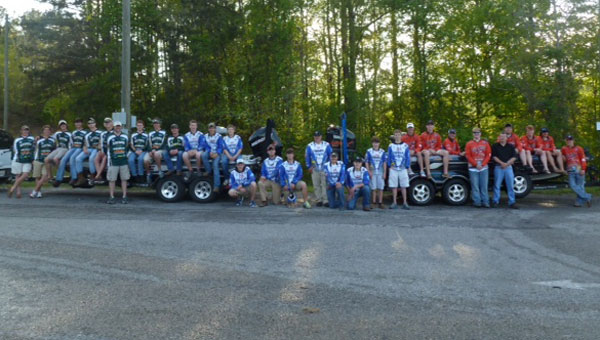 The City of Columbiana is gearing up for the largest high school fishing tournament to ever be held at Lay Lake.

The 2013 Alabama Student Angler Bass Fishing Association (ASABFA) state championship will be held May 10-11 at Lay Lake. On Thursday, May 9, student anglers, coaches, and boat captains will attend a dinner at the Shelby County Exhibition Center sponsored by Mayor Stancil Handley and the City of Columbiana.

ASABFA was recognized by the Alabama Legislature House and Senate Joint Resolution HJR27-Act-2011-156 as the official organization for student fishing anglers in the state of Alabama for boys and girls grades 7-12. It was signed into law by Governor Robert Bentley, Jr. on April 26, 2010.

The state championship will start at either at Beeswax Creek or Paradise Point on Lay Lake at 6:15 a.m. on Friday, May 10 with 198 boats participating. Boats will begin launching at 4 a.m. The weigh in will begin at 2 p.m. on the roundabout in Columbiana in front of the Shelby County Old Courthouse at the end of Main Street.

Southeast Pond Management has volunteered to manage and release the fish. The boats will then proceed to the Shelby County Exhibition Center on Highway 70 where guides, tackle and food vendors and the boats will be on display. The student fishing athletes will be available for autographs.

The expo will be open to the public on Saturday, May 11 from 10 a.m. -2 p.m. The final weight-in begins at 2 p.m. and continues until all fish are weighed. The top 20 teams will be announced up to the ASABFA state champion.

ASABFA has also conducted four regional tournaments at Weiss, Guntersville, Smith, and Tuscaloosa Lakes. The top five Angler Clubs of the Year will be announced on Saturday, May 11, 2013 at the ASABFA state championship.

High school ratings prior to the Tuscaloosa tournament were: Chelsea in first place, Thompson in third place and Pelham High in fourth place. Students must maintain a 2.0 average to fish.