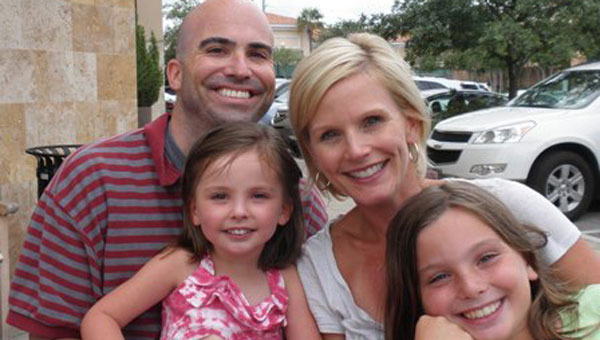 Laura Beth Monroe Gill, who died March 26 three months after being diagnosed with stage four lung cancer, is pictured with her husband Gene and daughters, Campbell and Caroline. (contributed)

The South Shelby Relay for Life has returned to Columbiana.

This year has totally changed how I view cancer even though my mother died of breast cancer after a 10-year battle. My precious friend Laura Beth Monroe Gill fought the fight for three short months after being diagnosed with stage-four lung cancer. One day she was fine and then she was gone. She was only 38.

Lung cancer is responsible for the most cancer-related deaths for both men and women throughout the world. Gill was a non-smoker. However, the first question that people asked was, “Did she smoke?” This offensive question implies that someone who smokes wants to get lung cancer. It is shaming and hurtful.

This is my third friend to die of lung cancer: Laura Beth, Jane Cox and Corinne Vickers. I remember Corinne telling me how she hated having lung cancer because people always assumed it was her fault. Cancer is a mean disease and cancer victims need our love and support with no shame. I will never ask that question again.

Laura Beth was fine at Thanksgiving, living life with her beloved husband, Gene, and two young daughters. In December, she fainted. Within days she learned that she had lung cancer that had spread throughout her body. On March 26, she slipped into a coma and left this earth surrounded by her family. Heaven received a beautiful angel and earth lost a beloved wife, mother, daughter, sister and friend.

When I formed the Laura Beth Monroe Gill Team, Laura Beth was fighting this disease. Today I relay in her memory and hope to have many, many luminaries light up the night so she can see from heaven that she is gone from this earth but never forgotten.

The relay will be Friday, May 10 at the Columbiana Sports Complex, 198 McDow Road. The event begins at 6 p.m. with Mayor Stancil Handley’s welcome followed by the survivor lap. Music by Mark Williams, Undivided, Austin Foster and Stand Up Praise, kids’ bouncy house, food and auction will follow. The luminary ceremony is at 10: p.m., fight back at 10:30 p.m. and a $500 drawing at 11 pm. The relay will end at Saturday, May 11 at 6 a.m.

School of Technology’s annual car show is May 4