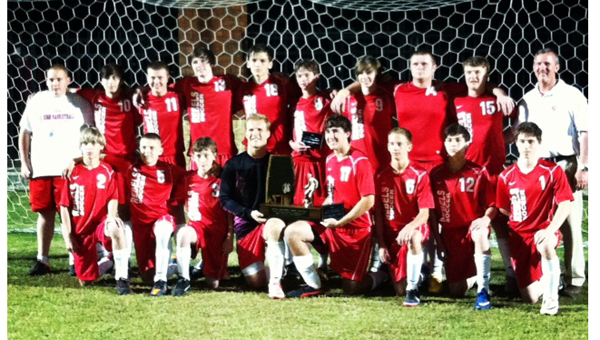 The Rebels went 11-1 in their first year of fielding a boys team and made a strong run through the playoffs, defeating Lyman Ward, 2-0 in the first round and Glenwood Academy, 5-2, in the semifinals.

After splitting the season series with Fort Dale, the championship game saw both teams keep each other off the scoreboard throughout the first half. The second half opened up with a Regan Carpenter shot that went wide of the goal, but Jonathon Langston put a foot on it to guide it in for a goal, making it 1-0 for the Rebels.

Within a few minutes, Fort Dale answered on a goal coming off a penalty kick, tying the game at 1.

The score remained tied at the end of regulation, leading the team to two overtime periods in which neither team scored.

Following the scoreless overtime periods, both teams went to a shootout to decide the winner. Each team sent out their five best shooters to take on the other team’s goalie one-on-one to try and score. After each team took five kicks, the score was still tied at 4.

The teams then went to a sudden-death shootout, which saw the Rebels score and hold the Eagles out of the net, clinching the championship.

In addition to winning the state title, CVA’s junior sweeper Zachary Sharp was awarded Tournament MVP, and Kyle Maxwell, Austin Brauer and Miles Sharp were named to the all-tournament team.

The Pelham baseball team prepares for a road trip to Auburn in the state playoff semifinals. (File) By DREW GRANTHUM... read more