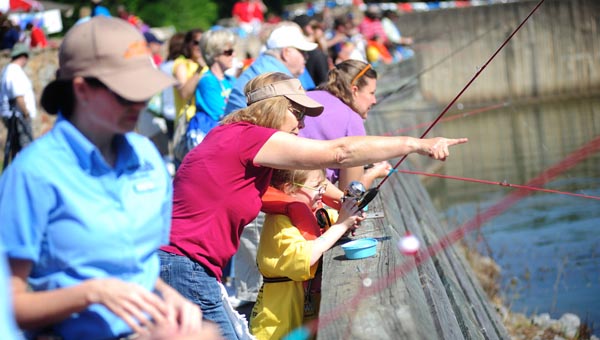 Dana Elliott from Grantswood Community School in Irondale fishes with her volunteer during the event at Oak Mountain State Park on May 9. (Reporter Photo/Jon Goering)

PELHAM –Be it the one that got away, the one that grew five pounds from actual catch to the first telling of the story or one that can’t be caught, it’s safe to say Oak Mountain State Park’s Double Oak Lake has seen its fair share of fish stories through the years.

Still, as many incredible stories as may loom over the scenic lake in Pelham, none quite compare to the ones that took place May 8-10 as more than 800 special needs students aged 5-21 from Shelby and Jefferson Counties took to the water in hopes of hooking a big one.

The State stocks a small pond on the back of the lake near the Wildlife Center with an estimated 8,000 bass, catfish and bream in order increase the chances of each participant landing a fish and getting their picture taken.

“We’re trying to get each kid a fish,” said DCNR Aquatic Education Coordinator Doug Darr. “It’s to help kids enjoy a day that is all about them, and a chance to show parents that people care about their kids.”

The event, which is put on in a partnership with the Alabama Department of Conservation and Natural Resources, Alabama Power and Alagasco, was started to give young anglers with special needs an opportunity to fish that might otherwise not be provided to them.

Each angler was paired with a volunteer helper that assisted them in baiting and casting their lines, and was equipped with a life jacket. In addition to fishing, students could participate in painting, a fake tattoo booth, a moon bounce and arts and crafts.

“We really enjoy this,” said Jerry Moss, ADCNR representative and one of the founders of the event. “Some of these kids have never caught a fish before. It’s a win-win.”

Cecelia Woods, receptionist at Linda Nolen Learning Center who has been involved with the event since it began, agreed with Moss.

“It builds kids’ self esteem up,” she said. “It gives them the courage to say ‘I can do.’”

“It does for grown ups too,” she said. “Some of the students can’t even talk, but you let them catch a fish, and they’ll let you know they’re excited.”