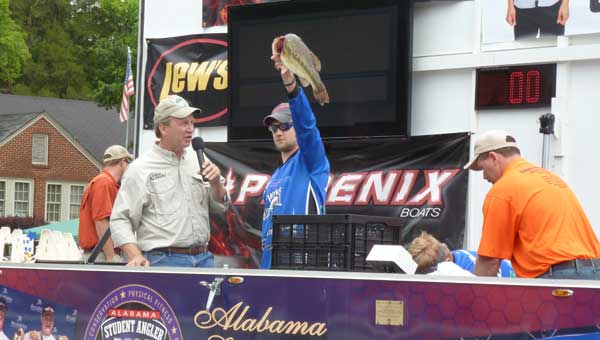 A high school angler weighs his big fish at the ASABFA State Championship on the roundabout in front of the Old Shelby County Courthouse in Columbiana. (Photo by Phoebe Donald Robinson.)

Approximately 200 boats pulled by pickup trucks or SUVs drove down Mildred Street to stop in front of the Old Shelby County Courthouse for the first official weigh-in of the ASABFA 2013 State Championship. Each two-student team from high schools all over Alabama weighed their live fish, with a limit of five per boat, and one big fish. Southeastern Pond Management housed the fish to be rereleased back to Lay Lake.

Main Street was full as people watch the fish being weighed. Two sets of bleachers banked each side of the courthouse filled with cheering spectators. Hot dog, BBQ, snow cones, and gift vendors lined the street.

On Thursday night the Shelby County Exhibition Center was filled with student anglers, their coaches and boat captains for a BBQ dinner hosted by the City of Columbiana and catered by Johnny Rays of Chelsea. Chelsea High School Fishing Team was first place going into last week’s Lake Tuscaloosa match.

The anglers launched out of Paradise Point Marina on Lay Lake early Friday morning and will again Saturday morning at 6 a.m. The boats will depart the marina Saturday at 2 p.m. to arrive at the Shelby County Exhibition Center around 2:15 p.m. for the final weigh-in. The public is invited to this free event.

After the Saturday weigh-in, the ASABFA State Championship 2013 Angler Team will be announced with the highest total weight for the two-day championship and also the biggest fish caught. The top 20 ASABFA Teams of the Year will also be announced Saturday night.

The public is welcome to watch the final weigh-in Saturday, May 11, 2013 at 2 p.m. at the Shelby County Exhibition Center on Highway 70.

Dana Elliott from Grantswood Community School in Irondale fishes with her volunteer during the event at Oak Mountain State Park... read more