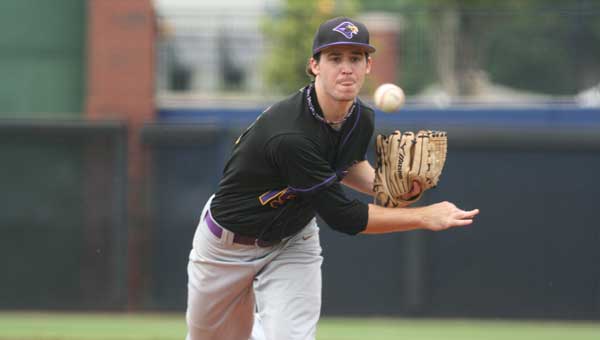 University of Montevallo junior Jackson Slaid blasted a go-ahead grand slam in the top of the sixth inning and fellow junior Edward Brandsema pitched a complete-game gem May 11 to send the Falcons to their first Peach Belt Conference tournament championship game following a 10-4 win over Columbus State University at Dolny Stadium in Greenwood, S.C.

The Falcons (34-19), the No. 8 seed in the conference tournament, will face No. 7 seed Georgia College in their first appearance in the Peach Belt Conference tournament championship game Sunday, May 10. First pitch is set for noon CST.

“I couldn’t be more proud of our guys,” said Montevallo baseball coach Chandler Rose. “The guys showed a ton of resiliency and toughness to bounce back the way they did.”

Rose was especially impressed with Brandsema’s durability in his third appearance in four days in the conference tournament.

“It all started with Ed,” Rose said. “I can’t say enough about Ed. It was one of the gutsiest performances by any pitcher that’s ever pitched for me.”

Slaid pounded an 0-1 pitch over the left-center field wall in the top of the sixth inning to give the Falcons a four-run lead, which proved to be plenty of run support for Brandsema. Brandsema, who entered the game having pitched 2 1/3 innings in relief in the tournament, allowed four runs on eight hits with five strikeouts and two walks in the first complete game he’s ever tossed.

“Toward the end of the game, mentally, I was locked in and it was my game,” Brandsema said. “I was really emotional after getting the last out.”

Marshall led the Falcons with three hits as he finished 3-for-4 at the plate. Marshall drove in one run and scored one run in the victory.

Montevallo took a 1-0 lead in the top of the first inning when Rodriguez, who reached on a fielder’s choice, moved to second when Slaid was hit by a pitch before scoring on a RBI single up the middle by Marshall.

The Falcons plated another run in the top of the second inning to push their lead to 2-0 when Collum, who reached on a walk to lead off the inning, moved to second base on a balk and advanced to third base on a ground out by Bryant before scoring on a wild pitch by Ezell.

Columbus State tied the game at 2-2 with a pair of runs in the bottom of the second inning. Brett Teschner, who led off with a single up the middle, and Oliver, who singled to center field, both scored on a two-run single to center field by Obermark.

The Cougars scored a run in the bottom of the third inning to take a 3-2 lead. Pullen, who reached on a walk, came around to score on a wild pitch by Brandsema.

Montevallo tied the game at 3-3 with a run in the top of the fourth inning when Simmons, who reached on a walk, moved to second base after Collum was hit by a pitch and advanced to third base on a balk before scoring on a RBI ground out by Fulmer.

The Cougars scored a run in the bottom of the fifth inning to push their lead to 4-3 when Pullen led off with a triple to right-center field before scoring on a ground ball by Cameron Scott that resulted in a double play.

The Falcons took the lead for good in the top of the sixth inning with five runs, which gave Montevallo a 8-5 advantage. Simmons, who reached a throwing error by the Cougars to lead off the inning, moved to second base on a ground out by Collum and advanced to third base on a wild pitch by Ezell before tying the game on a RBI single up the middle by Dubberly.

Fulmer and Rodriguez, who each reached on a walk, scored along with Dubberly when Slaid blasted an offering by relief pitcher Cameron Griffin over the wall in left-center field with the bases loaded to give Montevallo a 8-4 lead.

“I was just sitting on a fastball and I got it,” Slaid said.

The Falcons scored their final two runs in the top of the eighth inning to push their lead to 10-4. Marshall reached on a walk to start a two-out rally, stole second base and advanced to third base on a wild pitch before scoring on a RBI single by Simmons. Montevallo plated its final run when Hill, who reached on a walk and advanced to third base on Simmon’s single, stole home plate on a double steal.

Brandsema said he and his teammates are ready for the championship game.

Rose has plenty of confidence in his team after the way they responded in the rematch against Columbus State.

“We’re excited about the opportunity,” Rose said. “If we come out with the same energy and passion, good things will happen.”

By DREW GRANTHUM/For the Reporter The winner of the AHSAA Class 1A-4A Boys Soccer State Championship was going to make... read more