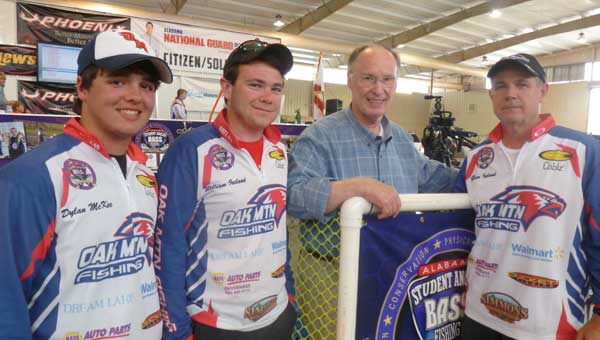 By PHOEBE DONALD ROBINSONS/For the Reporter

Gov. Robert Bentley surprised the crowd at the final weigh-in for the Alabama Student Angler Bass Fishing Association Saturday, May 11 at the Columbiana Sports Complex.

Bentley has been a strong supporter of ASABFA since its inception. In April 2010, he signed into law the Alabama Legislature House and Senate Joint Resolution HJR27-Act2011-156 recognizing ASABFA as the official organization for anglers in the state of Alabama for boys and girls grades 7-12.

Since that time, the ASABFA has grown from 18 teams to 174 teams. Founder Tim Tidwell along with Rose Ellis and Karen Stewart first came up with the idea of a high school fishing organization for the state. The ASABFA has exploded with high schools over the state participating, including Chelsea, Pelham, Thompson, Oak Mountain, Briarwood Christian and Spain Park high schools in Shelby County.

Dan Moultrie emceed the two-day event assisted by Stancil Brown, who weighed the live fish. The tournament launched out of Paradise Point Marina on Lay Lake, and Southeastern Pond Management released the fish back to the lake after the tournament’s finish.

Amanda Brown of Rainsville attended the weigh-in to cheer on her son, Austin, a seventh grader on the Plainview High School team.
“I am the equipment manager, sponsor, and snack maker,” said Brown. “This is the first year that Austin has been on the team. He has been fishing with his dad since age four. He also plays football, basketball and baseball. We will drive anywhere to catch fish. Columbiana has been a nice and friendly town.”

Austin had knee surgery the week before the tournament and completed on crutches.

“I was not going to miss this,” he said.” I love this sport, the competition and the challenge of it.”