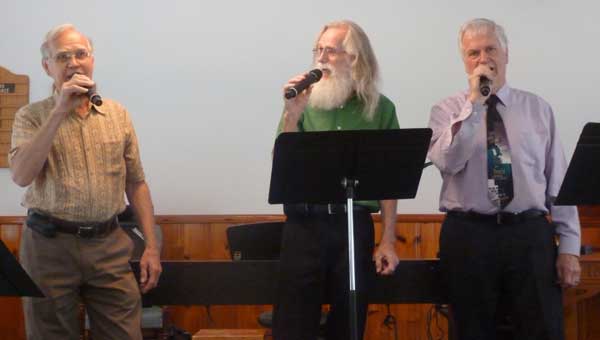 Mt. Era United Methodist Church located on Highway 26 in south Shelby County between Columbiana and Alabaster was founded in 1893 and has remained an active church since.

The homecoming was attended by families who grew up in the church. Faye Moore Vincent, daughter of Clyde and Irene Moore, grew up at Mt. Era. She attended with daughters Vicki Horton, Amanda Randolph, granddaughter Crystal Horton and great-grandchildren Caleb and Cadence Russell. Siblings of Robert and Marie Moore and grandchildren of Ed and Nancy Moore also attended with their families: Bobbie Moore Miller, Julia Moore Mercer, Harrison, Robert, John, and Michael Moore.

Mildred Boseman Baldwin (age 93), daughter of Charlie and Ada Moore Boseman, also attended the homecoming. Baldwin attended Mt. Era until 1957, when she began attending a Baptist Church in Alabaster. However, she still attended homecomings at Mt. Era after joining the new church.

Baldwin reminisced the time she recited the following poem at Mt. Era. She was only 3 at the time, but the poem is still committed to memory:

Mt. Era has been supported by a small but faithful congregation. Brothers Robert, Harrison and Michael Moore who are wonderful gospel singers gave three benefits with pianist Frances Love called “Three Brothers with Love.” They performed for a gospel sing-fest after the covered dish supper on the grounds. Church of God of Pelham member Warren Sweeney also entertained with song and keyboard.

Becky Layfield, last member to join Mt. Era in 1989, said that this day is very sad and bittersweet.

Mt. Era Cemetery across the street has graves from the early 20th century of church members that is maintained by a separate association. Although Mt. Era will no longer be an active United Methodist Church unless it is reopened in the future, the annual homecomings of family and friends will continue. Mt. Era’s lifelong members’ names as Moore, Boseman, Baldwin and Vincent will continue to celebrate homecomings in the future.