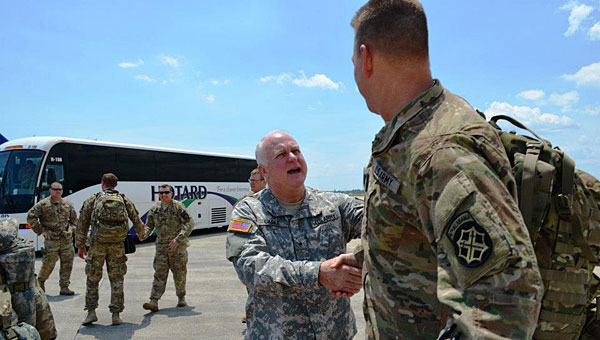 Brig. Gen. Charles Gable, center, welcomes a member of the Alabama Army National Guard shortly after the soldiers landed in Gulfport, Miss., on May 8. (Contributed)

Soldiers with a Pelham-based Alabama National Guard company got a chance to spend time with their parents and spouses over Mother’s Day weekend after returning to the United States on May 8.

Members of Bravo Company of the 1/167th Infantry Battalion of the Alabama National Guard set foot on American soil on May 8 after their plane touched down in Gulfport, Miss., following a nine-month mission in Afghanistan.

Alabama Army National Guard Brig. Gen. Charles Gable greeted the 1/167th soldiers as they exited their aircraft in Gulfport before the soldiers were transported to Camp Shelby in Hattiesburg, Miss., to complete demobilization.

Following demobilization, Bravo Company will hold a welcome-home ceremony at the National Guard armory off Yeager Parkway in Pelham. The ceremony date and time will be announced at a later date, according to the company.

“The real delight to many was spending some precious time with family members, friends and loved ones who met them upon their arrival at Camp Shelby Joint Forces Training Center,” read the 1/167th Facebook page. “Thanks to all who turned out to add to the excitement and give us all a taste of the welcome home events to come.”

Soldiers were granted passes to spend time with parents and spouses from 4 p.m. on May 11 to 8 p.m. on May 12 in observation of Mother’s Day.

Over the past nine months, the Pelham-based Bravo Company was stationed at a forward-operating base in Kabul, and completed “nearly 3,850 missions, safely moved approximately 16,500 personnel and traveled more than 50,200 demanding miles,” according to the National Guard.

Bravo Company’s missions were in support of the NATO Training Mission-Afghanistan, which is seeking to train Afghan forces to assume control of the nation’s security by the end of 2014.

Bravo Company, one of six companies making up the 1/167th Infantry Battalion of the Alabama National Guard, deployed in June 2012.

Mack Warren Lay Lake Mack Warren, age 71, of Lay Lake, passed away peacefully in his home on May 9,... read more