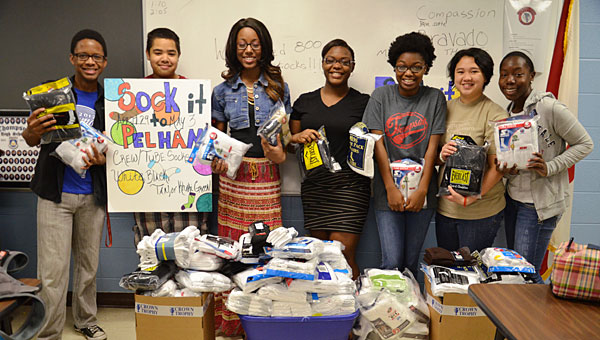 Members of the Thompson High School Junior ROTC team display the 800 pairs of socks they collected during the Socks for Soldiers campaign. (Contributed)

Several Alabaster and Helena schools recently worked together to provide some of the most-requested items by deployed United States soldiers.

Through the annual “Socks for Soldiers” campaign, which was organized a few years ago by Alabaster resident Joyce Bulford, students collected pairs of socks to ship to soldiers deployed overseas.

During the 2012-2013 school year, six local schools gathered nearly 2,000 pairs of socks through the program.

“They do not realize it yet, but (THS) collected the most socks of the participating schools this year,” Bulford wrote in an email.

Bulford, who has lived in Alabaster since 1985, organized the campaign after working with the Blue Star Mothers of Alabama and learning tube socks were among the most-requested items by soldiers deployed to the Middle East.

Bulford said Thompson High School’s success this year was largely due to the efforts of the school’s Junior ROTC program.

Participating in projects such as the sock drive recently helped the ROTC earn the “Distinguished Unit With Merit” award, which is given to the top 8 percent of Junior ROTC programs in the country, unit sponsor Lt. Col. Douglas Crabb said during a May 13 Alabaster Board of Education meeting.