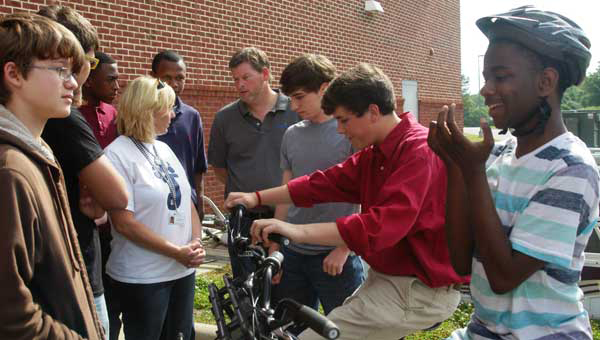 Valinda Pate, Shelby County Board of Education adaptive P.E. teacher, gets some tips from Brian Copes, Calera High School Engineering teacher (center) and his students on how to disassemble a new tandem bicycle for easy transport. (Photo by Linda Long/For the Reporter.)

The smile on P.J. Manzy’s, face was as big as all outdoors as he wheeled into the parking lot at Calera High School on Thursday morning. It was a moment he had looked forward to for a long time.

P.J. and his classmates had been carefully following the progress Brian Copes’ engineering students were making as they designed and built a unique transportable tandem bicycle to be used in Shelby County schools for special needs kids like P.J.

Actually, his smile was equaled only by the smiles on the faces of Copes’ engineering students who were seeing for the first time the results of the fruits of their labors.

According to Calera High School junior Stephen Wolfe, “When you’re working on something like this it’s hard to understand the weight of what you’re doing. It’s completely different seeing someone actually ride it. It was very fulfilling to me. It’s also great to know that hundreds of kids across Shelby County will be able to do the same thing – just ride a bike.”

The bike was actually adaptive P.E. teacher Valinda Pate’s idea. She travels around the county helping to modify existing curriculum so that special needs kids can “participate in activities just like their peers.”

“We wanted our kids to be able to enjoy the same recreational activities that most of us take for granted,” she said.

Pate said she and her fellow teachers had already been working with a tandem bike that didn’t come apart, was cumbersome and almost impossible to take from school to school.

“So, I brought our dilemma to Mr. Copes,” she said. “ I explained that our big concern was to be able to take the bike apart and put it into a car or truck. I never had a doubt that he and his students would come up with something.”

This teacher extraordinaire, who was named a Teacher of the Year by People magazine in the fall of 2012, did not disappoint. Copes, has earned his title of “go-to guy” quite honestly.

Thus far, he has led his pre-engineering program students in building affordable prosthetics, sports utility vehicles, an environmentally friendly “green” car and the list goes on. He’s now working with his students on a paddle wheel boat that will be taken to Honduras in the summer of 2014 to supply hydroelectric power to mud huts along the river.

“I try to teach kids the importance of giving of themselves to others. That’s where you find the real reward in life like watching the smiles on the faces of the kids as they ride the bikes this morning. That can’t be purchased with money,” said Copes. “I was one of these kids that struggled in high school and I had teachers in my life take an interest in me. That is what I try to do here.”

He apparently has succeeded. As Wolfe explained, “He’s always ready to teach, to show a student how to do it. Mr. Copes is definitely the embodiment of a ‘teach a man to fish’ kind of guy.”