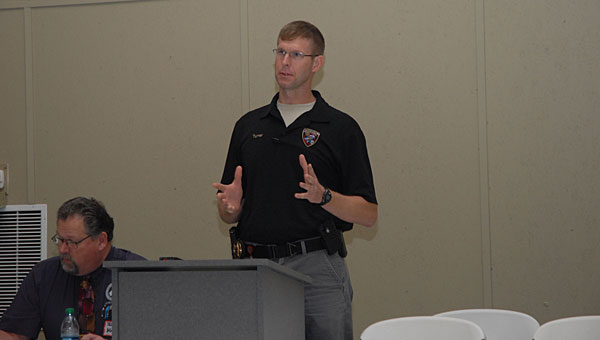 The Shelby County Juvenile Drug Court is seeing a significant increase in “very dangerous and unpredictable” synthetic drugs, and is warning of side effects ranging from seizures to permanent kidney damage.

Designer drugs are man-made compounds labeled as “spice,” “bath salts,” “incense” or other compounds, and were easily purchased at local gas stations until they were outlawed in Alabama a few years ago. Today, the substances are easily available online, Littrell said.

“The long-term side effects are pretty much unknown,” Littrell said. “It’s very addictive. Within six months, these kids are getting to daily usage. By the time they make it to drug court, they have a full-blown addiction.”

During the meeting, Littrell and her Juvenile Drug Court colleagues Ryan Burroughs and Lisa Smaha displayed several household items modified to hide controlled substances in hidden compartments. The items ranged from water bottles to Pringles cans, and retained their original appearances and weight after modification.

As of May 10, the Task Force had confirmed 12 drug-related deaths this year – two of which were believed to be tied to heroin.

Kickoff of another kind

By DREW GRANTHUM / Sports writer Allow me to introduce myself. I’m Drew Granthum, and I am your new sports... read more