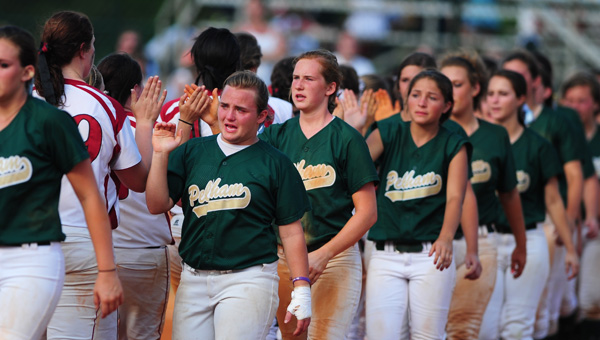 A disappointed Pelham team congratulates Sparkman after losing in the AHSAA Class 6A State Championship game in Montgomery on May 17. (Reporter Photo/Jon Goering)

MONTGOMERY —On the biggest stage in the state, the Pelham Panthers softball team gave a great performance; it just wasn’t enough.

The Panthers fell to Sparkman in the AHSAA Class 6A State Softball finals, 9-1, bringing a memorable season to an end.  The day ended as it started (with a tough loss to Sparkman) and while the final score may not indicate it, the Panthers put up a fierce battle throughout the game.

Pelham opened up with a great opportunity to get up early on the Senators, as Whitney Gillespie reached on a walk, Maddie Walker reached on an error, Emily Spain was hit by a pitch and Reagan Curtis was walked to bring in a run.

The Panthers were unable to convert more than the lone run, as the inning ended with the bases being left loaded. Sparkman answered back with two runs in the bottom of the first. As the Senators tacked on runs throughout the game, slowly increasing their lead, PHS struggled on offense, managing just four hits in the game.

Even with the struggles at the plate, the Panthers held Sparkman to a four run lead until the bottom of the sixth, when the Senators tacked on four to pull ahead, 9-1. Pelham was unable to mount a come back, falling by the same score.

Despite the loss, Coach Amy Sullivan had nothing but praise for her squad.

“We’ve not had one fuss, one argument,” she said. “They function as a unit. They hurt for each other. I would not lie and say we are not disappointed. We came to win the state championship, but even though they fell a little bit short, there are so many positives they can take away from this once they have (some) time. I couldn’t be more blessed as a coach.”

It was a tough outing for the Shelby County Wildcats in the opening round of the AHSAA Class 5A State... read more