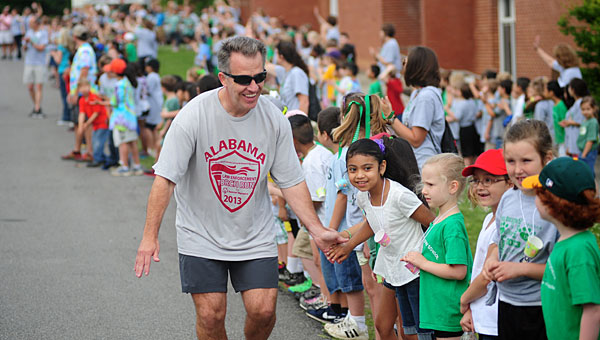 Field day at Pelham’s Valley Elementary School was significantly more eventful than normal on May 17.

Shortly after 8 a.m., a parade of law enforcement vehicles from throughout the Birmingham metropolitan area – many of which had their lights flashing – traveled down U.S. 31 and took a turn in to the VES parking lot.

Included in the motorcade were dozens of area law enforcement officers who were in the process of running a 1.7-mile loop from the Pelham Civic Complex to the school and back to Alabama 119 as part of the annual Alabama Law Enforcement Torch Run for Special Olympics.

“They are very excited about this,” Pelham police officer and Law Enforcement Torch Run Regional Coordinator for Central Alabama Debbie Sumrall told the officers before they left the Civic Complex. “We are so excited to have each and every one of you out here this morning.”

Each year, the Law Enforcement Torch Run crosses the state to raise money for the Special Olympics of Alabama in Troy, which is the run’s final destination.

After starting in north Alabama, the run worked its way to Birmingham on May 16 before picking up in Pelham on May 17.

In the days leading up to the Pelham leg of the run, VES teachers showed videos on the Law Enforcement Torch Run to familiarize students with the event, Sumrall said.

From Pelham, the run will travel to Montgomery and on to Troy, said Law Enforcement Torch Run State Director and Birmingham Police Department Lt. Theophilus Smith.

“On behalf of the torch run, I’d like to give special thanks to the city of Pelham for hosting us this morning,” Smith said during a ceremony in front of the Civic Complex, noting officers from all over the state will help work the Special Olympics this weekend.

Pelham Mayor Gary Waters, who served as Pelham’s fire chief for several years, said the Torch Run was personal to him.

“I appreciate what you do,” Waters said. “With a background in public safety, I still have a soft spot for people who knowingly put themselves in danger for people they don’t know.”

Pelham softball moves on to semifinals

The Pelham Panthers softball team continues its impressive streak in the postseason, as they defeated Austin High, 2-1, to reach... read more