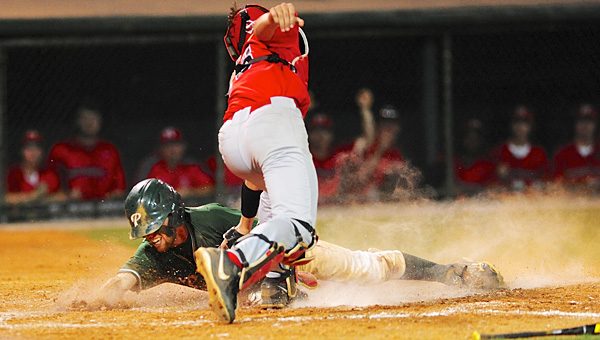 Pelham’s Fletcher Johnson slides safely into home past a tag from the Hewitt-Trussville catcher in the bottom of the 7th to given Pelham a 3-2 victory in the first game of the AHSAA Class 6A State Championship game in Montgomery. (Reporter Photo/Jon Goering)

One win is all that separates the Pelham High baseball team from an AHSAA Class 6A State Championship, as the Panthers took down Hewitt-Trussville in dramatic fashion, 3-2.

It was a case of Coach Sean Anderson’s “one pitch at a time,” mantra coming through in the clutch, as the Panthers got down early but slowly worked their way into a win.

Hewitt-Trussville struck first, as Connor Cox took a Thomas Lowery pitch down the left field line and into the highway behind Paterson Field to open up a 1-0 lead.  Carter Pharis then reached base when a infield fly was misjudged by Chase Brashier. Pharis later scored to make it 2-0 in favor of the Huskies.

Flash gallery not showing up? Click here for photographer Jon Goering’s gallery from game one.

Pelham picked up a run in the bottom of the third when Fletcher Johnson scored after hitting a double and stealing third before a Hunter Stovall single brought him in.

The Panthers then scored again in the bottom of the sixth when Stovall scored on a Jackson Pruitt single to tie the game at two.

After Hewitt was unable to score in the top of the seventh, Pelham came into the last inning of Game 1 looking for someone to step on the state’s biggest stage.

They got it in Fletcher Johnson.

Johnson lined a one-out single to left field, and proceeded to steal second base to put the Panthers in scoring position. Alex Urban connected with a shot up the middle, and Johnson came home, beating the throw and clinching the win for Pelham.

Johnson finished the game 3-4 at the plate, with two runs scored and three stolen bases. Lowery fanned 10 Husky batters on his way to the win, giving up just three hits.

Coach Sean Anderson said the win was big, but only as good as the next game.

“We have to go and play pitch by pitch, and do what we do,” he said. “I think the moment got to us a little bit early and once we settled in and started playing the game of baseball instead of Hewitt-Trussville, things started taking off for us.”

He also said he felt the team’s nerves calmed with the win.

“I believe in our guys,” he said. “But I’m always wary. I want to make sure we follow our philosophy. I think they’ll be a little more relaxed now, which is always a good thing.”

The Panthers will take on Hewitt again Saturday at 4 p.m. at Riverwalk Stadium in Montgomery.

Lady Wildcats advance to next round