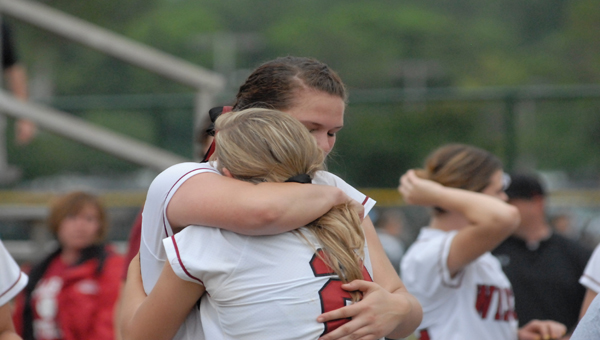 MONTGOMERY —The run for a state title is over.

The Shelby County Lady Wildcats’ strong season ended with a loss at the hands of Curry High in a Class 5A State Championship elimination game, 7-0.

It was an up and down experience at state for the Lady Wildcats, dropping their first game to Hayden, 10-0, but rebounding in their second game, beating Southside-Gadsden, 11-1.

When they took the field for their third game, the sunshine and clear weather that surrounded the tournament for the first two days had given way to a steady rain and slick field conditions, which appeared to affect both squads with ball control at times.

SCHS opened up the top of the first with Brittany Landsford hitting a single, then advancing on a Curry error to get into scoring position. Kaitlyn Paschall was walked. Following a fielder’s choice by Jaselyn Harrison, Lansford was forced out at third and Taryn Green (courtesy running for Paschall) advanced to second.

As promising as it looked, the Wildcats were unable to convert the runners into runs, as a groundout ended the inning with the score tied at zero.

It remained scoreless until the bottom of the second, when the rain began to take its toll on Paschall at pitcher. The reduced grip on the ball led to a walk, a passed ball and a hit batter, loading the bases for Curry.

Another passed ball allowed a runner to score, but the Wildcats tight-roped out of danger, as a ground out ended the inning with the score at 2-0 for Curry.

Run opportunities came again for the Wildcats  in the top of the third, as Brianna Buie hit a one-out single, advancing to second on a passed ball. Lansford drew a walk, and both runners advanced on another passed ball. Following a third passed ball, Buie tired to take home but was called out in a close play. SCHS again ended the inning with runners in scoring position.

Errors permeated the bottom of the fourth for the Wildcats, as Curry registered four runs to pull ahead 5-0.

Things looked to turn around for Shelby in the top of the fifth, as the Wildcats were able to load the bases, but again, could not bring a runner across. It would prove to be the final push for Shelby, as Curry added two more runs with no answer from the Wildcats, ending their remarkable run.

Coach Ashley Phillips said he felt the field conditions were a factor in the loss, but ultimately not the deciding factor.

“We just didn’t hit the ball well enough,” he said. “Their pitcher did a good job. I think (the weather) affected our pitcher especially. I don’t think it’s the reason they won, by any means.”
The Lady Wildcats finished the year 29-13 and bid farewell to seniors Harrison, Lansford, Buie, Haley Stallings and Ashlyn Blackerby. Phillips said the team’s success was due in part by the play of the upperclassmen.

“Our seniors got us here,” he said. “It’s up to the other girls to improve (on this season).”