A salute to Old Glory and the heroes who defend her 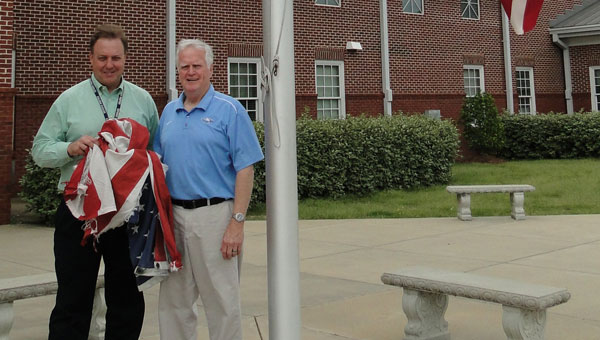 A flag flying outside a county courthouse inspired Johnny Cash to write the song “Ragged Old Flag.” I thought of the song when Calera High School custodian Robert Moore told me the school’s flag was damaged in a storm that passed through in April.

What do you do with Old Glory when she’s tattered? The flag was given to Calera Intermediate School Principal Brent Copes, who is a leader for Cub Scouts Troop No. 317.

“When a flag is no longer useable, it is retired with dignity,” Copes said. “The flag is cut into pieces — the blue star field, then the stripes. The flag is placed in a fire used only for that purpose and we have a retirement ceremony. When the remnants are completely destroyed, the fire is allowed to burn out and we bury the ashes.”

There are rules of etiquette for the U.S. flag. Some include the flag should be displayed above all other flags from sunrise to sunset. On special days it may fly at half staff. On Memorial Day, it’s flown half staff until noon, then raised.

The flag should not touch the ground. The flag should never be used for decoration or worn as clothing. Military members should render military salute to the flag, all others should face the flag and stand at attention with their right hand over their heart and remove any headdress.

Memorial Day is May 27. The holiday was created to honor American men and women who turned the soil of many battlefields blood red. Men and women who made the ultimate sacrifice in service to the United States of America.

God bless America. May he always watch over and guide our great nation.

Mollie Brown is a community columnist for the city of Calera and can be reached at dmjhb1@bellsouth.net.