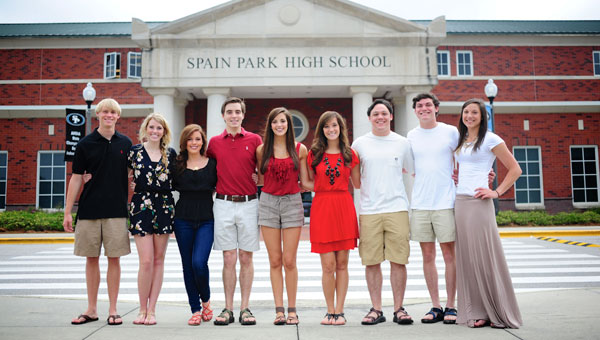 HOOVER — The story of the three sets of triplets in Spain Park High School’s graduating class really starts on Feb. 24, 1995.

That’s the day Connor, Katherine and Paige Burleson were born.

Just a few months later came A.J., Hannah and Sam Hudson on June 17, then a week later, on June 25 — in the same hospital — came Carlton, Danielle and Amanda Ivy.

Years later, the Ivys and the Burlesons went to Greystone Elementary School together, and then in sixth grade, the three sets of triplets all ended up at Berry Middle School. At Berry, onlookers were amazed, but the nine understood each other — and began building a bond that, six years later, seems unshakeable. 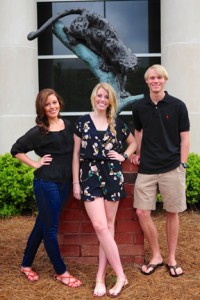 Sam said his friendship with the other triplets is based on much more than just convenience.

“It’s not because we’re triplets. We’d still be friends without that,” he said.

Get them all in a room together, and it’s obvious he’s right. The laughter and jokes start immediately, and there’s an apparent comfort among them. Each one of them understands that the others are so much more than just one third of a whole.

Each of them has been heavily involved with extracurricular activities throughout their high school careers — from A.J.’s involvement with the environmental Green Team, to Sam and Carlton’s places on the band’s drumline, to Katherine, Paige, Danielle and Amanda’s time as cheerleaders — but they all said they look forward to life after high school. 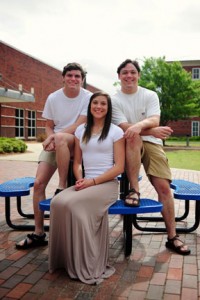 “We’ve shared everything our whole lives, so we thought it’d be nice to split up but still be close to each other,” said Amanda on the decision not to share a room with Danielle.

While at Alabama, they may see Connor and Paige, who will also start at Tuscaloosa in the fall. Connor plans to study engineering, while Paige will study communications and journalism.

However, Katherine is breaking away from her triplets, choosing to study graphic design at Auburn University instead.

“I really liked the Auburn campus, and I felt like it was the best fit for me. We’re all pretty individual anyway, so it may be hard at first, but I think we’ll be able to handle it pretty well,” she said.

The Hudsons are also going their separate ways, with A.J. joining Katherine at Auburn, Hannah going to Birmingham-Southern College and Sam heading to UAB. They’re all undecided on what they’ll study in college. 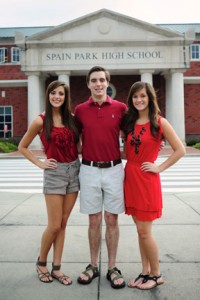 Sam said the three each chose their colleges based on the best personal fit.

“I think we just all found where we wanted to go, and we get to be our own person,” he said.

Hannah echoed her brother’s thoughts, saying she looks forward to being known as just Hannah Hudson.

“At this point, I’m more excited about us becoming our own person and not just being ‘the triplets,’” she said.

However, the nine don’t plan to leave their bond behind.

“I’ll definitely keep in touch with everyone. I’m going to miss these guys,” Carlton said.

Sam’s already planning for further down the road.

“One day, we’ll all be 80 years old and all our grandchildren will be in a cabin together for Christmas,” he said to a room full of laughter.

Looking around, Hannah shook her head and smiled.