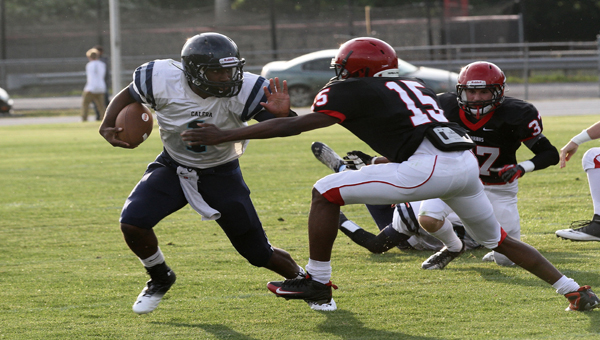 Calera running back Ronnie Clark (1) breaks a tackle in a spring football matchup against Thompson May 16.

The Calera High Eagles notched an upset of sorts May 16, knocking off Thompson High 35-28 in a spring football exhibition at Larry Simmons Stadium.

The varsity squads sparred for three quarters, with the Eagles gaining control of the game on the ground.

“I thought we ran the ball well,” said Calera coach Wiley McKeller. “ We were seven-of-nine passing, but we’ve got to expand.”

The duo of Ronnie Clark and Sha’Keith Tyes accounted for 418 total yards of offense, as Clark posted 185 yards on 20 carries, with three touchdowns. Tyes carried the ball ten times for 162 yards and two touchdowns. Jordan Bishop led the Eagles in receiving, pilling in four of the seven passes thrown.

In addition to the numbers put up on offense, Calera recorded two interceptions of defense, with Daillon Kennedy and Dylan Reddin each picking off a pass.

McKeller said the win was a boost for the Eagles headed into the summer workouts months.

“It’s a big deal because it’s local,” he said. “Our kids were really excited. A win like that gives us motivation. It’s a confidence builder. It proves we can play (with bigger teams).”