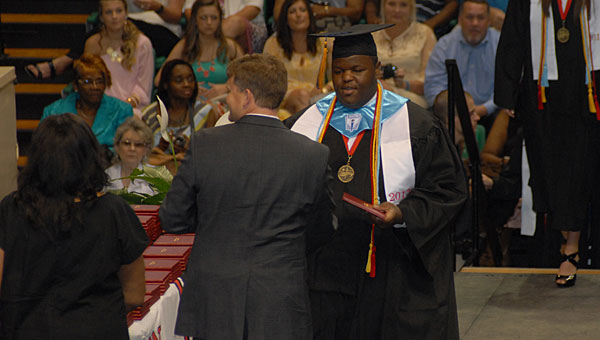 For Thompson High School Class of 2013 valedictorian Kirsten Hill, May 21 signified much more than the last day she and her classmates would all be together in the same place.

As Hill and her 423 fellow classmates prepared to receive their diplomas at the THS graduation ceremony at UAB’s Bartow Arena, she knew the day meant something much more.

“Today is a milestone in each and every one of our lives,” Hill said. “If we live our own lives and make our own choices, it will get us exactly where we need to be.”

“I hope you will continue to be a shining example wherever you go in your life,” Peeples told his classmates. “The Class of 2013 was a close-knit family. I encourage you to live, laugh and love as much as you possible can.”

The ceremony drew a near-capacity crowd to Bartow Arena to see the members of one of the largest THS senior classes move to the next chapter in their lives.

During the event, the THS Junior ROTC presented the colors, and senior Jayla Williams led the Pledge of Allegiance. Senior Chris Holt led the invocation and the THS Madrigals choir performed “Count on Me” while many of the students sang along.

“Seniors, we are proud of you,” said THS Principal Dr. Daniel Steele. “Family and friends, thank you. Through your support, you played a big part in getting them to this point.”

Members of the Class of 2013 became close by participating in community outreach projects such as the Josh Carden Project, which helped to build a house for THS alumni Josh Carden – who has cerebral palsy – and his grandmother after Carden’s grandfather was killed in a traffic accident.

“We came together in so many ways,” Hill said. “Together, we raised so much more money than anyone expected (for the Josh Carden Project).”

“I will never forget the comfort and love our classmates demonstrated for each other,” Peeples said.

Proud of our student-athletes

By NEAL WAGNER / City Editor I’ll admit, I was starting to get pretty nervous a few weeks ago watching... read more