BCS golf teammates carry load for each other 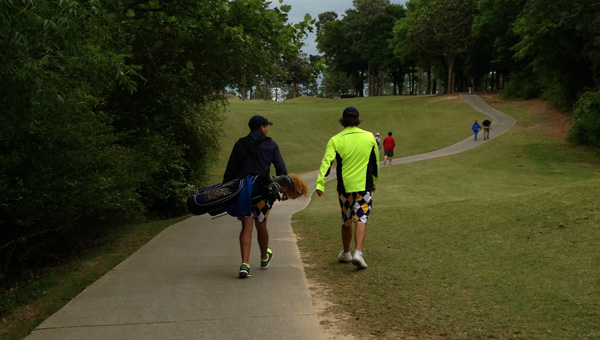 The bond between teammates is arguably one of the most overlooked aspects of sports, especially the one that unifies a grizzled veteran with a younger player looking to rise up the ranks.

Such is the bond between Briarwood golfers Trevor Page and John Hayden; Page, a senior, and the sophomore Hayden have spent several hours playing together through the course of the season, said BCS golf coach Jim Brown.

“They like playing together,” he said. “Those two guys played one and two for us all year long. They encourage each other.”

In an ironic twist, the two ended up playing in the same pairing on the final day of the AHSAA Class 5A State tournament May 14-15, with both finishing together on the scoreboard as well. Page finished third and Hayden fourth only two strokes apart, but how the two got to the state tournament was even more impressive.

The Lions failed to qualify for the tournament as a team by one stroke, but there were still spots available for golfers looking to play as individuals. Hayden was able to secure a spot in regular play, but Page was among three tied for the final transfer spot.

Page was able to win the playoff, advancing to state, and was congratulated by Hayden in an interesting way.

“As John came up to congratulate him, Trevor was a little jittery,” Brown said. “It was a lot of pressure, with a big gallery following. John just took (Trevor’s) club bag and carried it in for him, and they walked into the clubhouse together.”
Brown said although there was little said about the act, it spoke volumes about the two.

“They’re consummate team guys,” he said. “It’s a great example of teammates taking care of each other.”

By DREW GRANTHUM / Sports Writer Members of the 2013 Kingwood Christian School softball team were awarded for their accomplishments... read more