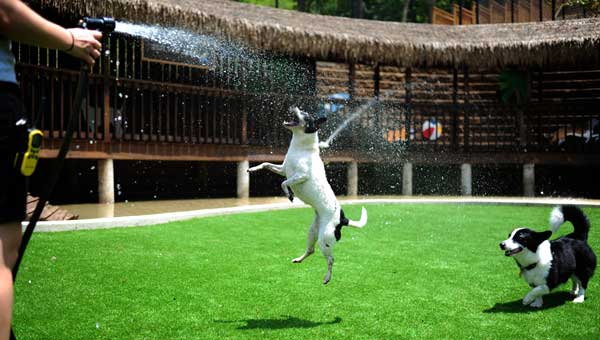 Dogs in the large dog daycare area of the newly opened Cahaba Beach Dog Park in Inverness get a splash of cool water on a warm afternoon. (Reporter Photo/Jon Goering)

The 7,500-square-foot facility sits on six-and-a-half acres of manicured trails designed with four-legged friends in mind.

“We’ve done everything we can to be a full service dog facility,” facilities manager Abigail Witthauer said. “Not only do we have the four-acre fully fenced park for people to visit with their dog, but we also have grooming, training and behavior, day care and boarding.

But “boarding” takes on a whole new meaning at Cahaba Dog Park. Guest rooms are actually luxury style suites ranging in size from a standard 4 x 6 room all the way up to a penthouse model. Owners can monitor their pet from a computer or mobile device, and each room comes with a large-screen TV set.

“Now we don’t give them cable TV, but we do play a lot of Disney movies and I have the complete series of ‘Rin Tin Tin,’ which seems to be a huge hit,” Witthauer said.

The family-owned facility, located on Cahaba Beach Road off U.S. 280 in Inverness, was four years in the making. It was the brainchild of Ken Horne and his family, including wife, Ann; son, Carlton; daughter, Stacye Seremet; and son-in-law Mike Sereme.

“My daughter and her husband actually met at a dog park in Nashville,” said Horne. “When they moved back here they looked around and at that time couldn’t find any really nice dog park. So, we decided to build one.”

After locating and purchasing the property and “moving 20,000 tons of dirt” to prepare for construction, the Hornes embarked upon the adventure of building a dog park.

“What we had in mind was a rather modest venture, but we started looking around and everything we saw, we liked,” Horne said. “And if we liked it we added it to the project and before you know it took a life of its own.”

The park also features an off-the-leash play area for owners and their dogs. One section of the fully fenced and landscaped park is designed specifically for larger dogs, while a separate area is designated for smaller dogs. Both park areas feature tunnels, ramps, streams, trails and plenty of wide open space and trees for dogs to play with their owners and to socialize with other like-sized dogs.

“The one thing that sets us apart from other facilities is that we are a private facility which means you have to become a member,” Witthauer said. “Membership includes access to the off the leash play area.”

Cost for membership is $15 for one pet and $20 if more than one pet. Boarding and day care services are open to the public.