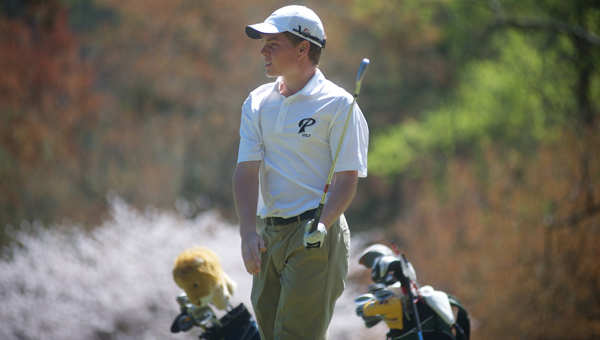 Pelham’s Connor Slane watches a tee-shot fly towards the green during his round in the Shelby County Golf Tournament on April 2 at Eagle Point. (Reporter Photo/Jon Goering)

In golf, it takes a great deal of mental fortitude to post consistent results, and even more to win.

Which is what makes Connor Slade’s 2013 season so spectacular; in 11 matches and tournaments the Pelham High senior golfer entered, he won six, finished second in two and third in two. He finished fifth in the other.

A remarkable run, to be sure, but one that PHS golf coach Phillip Lawson said he wasn’t surprised to see.

“I’ve been coaching for 14 years, in all different kinds of sports,” he said. “I’ve coached some players who have gone on to play at the next level. I ‘ve never had an athlete with a work ethic like his.”

Lawson said it was Slane’s desire to improve that set him apart.

“It reenergizes you to see kids work so hard,” he said. “As a coach, Connor is what you want.”

Lawson pointed out Slane’s attention to the mental aspect of golf. He noted Slane’s even-tempered demeanor and his ability to push through playing with a severe sinus infection and winning despite a stomach virus.

Slane said emotional management was a part of practice, much like working on putting.

“You just have to develop it and learn how to control emotions,” he said. “I tried to push through and play the best golf I (can). I guess it’s just kind of a mental toughness thing.”
He signed a golf scholarship with the University of North Alabama in November, and said he fully intends to pursue a professional career after graduation.

“That’s the main goal,” he said. “If I can keep improving the next four years like I have the last four, I’d like to take a shot at it. I want to get a good education in case golf doesn’t work.”

Lawson said he feels the attention UNA can provide will help Slane.

I think when he gets to the next level where he can have more hands-on (assistance) his game will take off,” he said. “No doubt.”

XTERRA winners not affected by rain

FROM STAFF REPORTS PELHAM —  For the first time in six years, a face other than Conrad Stoltz’s posed for... read more