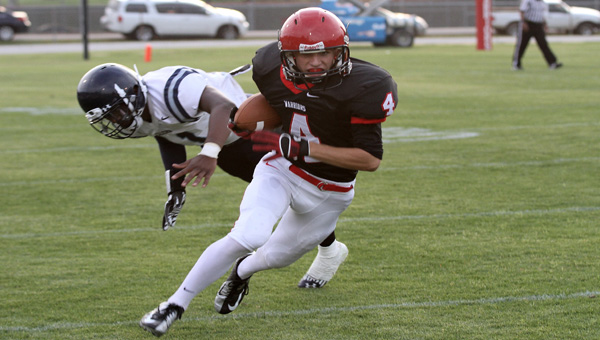 Thompson’s Matt Tolbert (4) hauls in a pass from Zack Brammer to turn it into a 78-yard touchdown in a spring game May 16. (Reporter Photo/ Eric Starling)

While the Thompson Warriors’ 35-28 loss in their scrimmage against Calera High may not have been what they hoped for, head coach Michael Montgomery said he felt confident in the team’s progress through the spring.

“We didn’t share a lot with respect to where we’re going,” he said. “It was a very good Calera team. I like the fact we competed well. I’m happy with how our reserves played.”

Montgomery said he felt his team’s youth in several key areas was going to be a point to improve upon during the summer months.

“We’re still young,” he said. “We lost a lot of personnel on defense. We need to come up with a group of defensive backs capable of playing 6A football on Friday nights.”

“We have a first-time quarterback,” he said. “We need him to perform at that position. We need a leader who can make good decisions. I thought he did very well having just nine practices coming into the game.“

He went on to say that depth was an issue in game for the Warriors.

“Our biggest thing is depth along the offensive line,” he said. “We got into a position early in spring with injuries. We didn’t play as well up front, but two of our five (starters) are injured.”

Montgomery said the main concern headed into the summer workout months is developing the youth on the team.

“The numbers are there, the bodies are there,” he said.. The thing we’re focused on is to grow our system. I’m blessed to have two of the best coordinators around in Bruce Hill and Kerry Gleaton. It is important to continue to have consistency in our practices and to develop our players. We’re not trying to be anyone else

So close, yet so far away. Six simple words that perfectly sum up Thompson softball’s efforts in the 6A State... read more