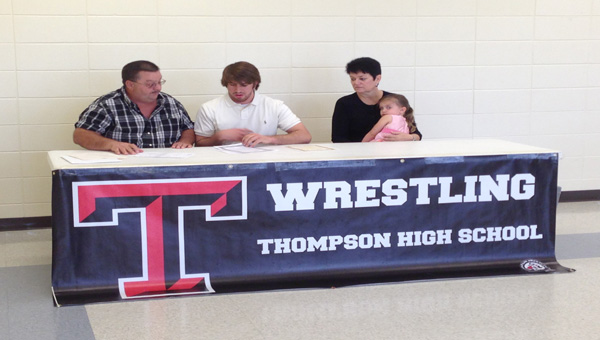 In just its sixth year of existence, the Thompson High wrestling program has its first two NCAA Division-I signees.

Nick Hall and Austin Gould will be attending Appalachian State and The University of Tennessee at Chattanooga, respectively.

Coach Shawn Weltzin said the signing were huge, not just for the two involved, but for Thompson’s young program as a whole.

Hall was the 2013 6A State Champion in the 170-pound weight class, finishing with a 28-1 record. Gould was injured during the sectional finals in 2013, but finished the season with a 40-9 record through the season.

“Two guys, that’s pretty huge,” he said. “ It’s great. It shows the other kids that being from Alabama, which is not known for being a wrestling powerhouse, they can be recruited and wrestle anywhere.”

Weltzin said the program has become as strong as it has because of the support it receives.

“It’s the willingness of parents and kids to buy into the philosophy of the program,” he said. “We want (the kids) to succeed.”

“We have freshman gearing toward that as a goal,” he said. “These guys (paved) the way.”