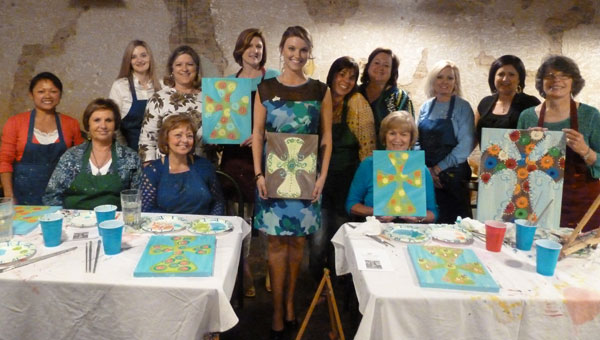 Miss Shelby County 2013 Jaime Brooks has had an outstanding banner year. She will compete in the Miss Alabama 2013 Pageant June 5-8.

At the Vignette Spring Fling held at Bernie’s in Columbiana, Brooks modeled her Miss Alabama wardrobe as the Vignettes ate a delicious dinner cooked and served by chef/owner Benard Tamburello and painted a cross on canvas instructed by Trina Stogner of Color Outside The Lines.

Brooks graduated from college debt free from scholarships earned through the Miss America Organization, of which Miss Shelby County is a preliminary pageant. MAO is the largest scholarship organization in the world for young women, awarding $45 million to 12,000 women in local, state and national pageants last year.

Brooks was valedictorian of her high school. Unfortunately, her family did not have the financial resources to send her to college. Her high school counselor suggested MAO pageants to earn scholarship money. Brooks gave it a try and won Miss Clay-Chalkville, her first pageant. Her platform “Dare to Discuss: AIDS Awareness and Advocacy” is a passion that began at age 14 when she began volunteering with Birmingham Aids Outreach. Brooks won the Sonya Lefkovits Community Service Award at Miss Shelby County and the Miss America Community Service Award last year for her work with AIDS awareness.

At Miss Shelby County, she wowed the audience with her charismatic dance routine and articulate answer to her on-stage question.

Over the past year, Brooks has represented Shelby County in more than 35 events. From emceeing pageants to participating in AIDS awareness events, from hosting princess parties and girls conferences to riding in parades, from modeling at SCAC Celebration of the Arts to attending the Shelby County 195th birthday celebration, Brooks has traveled far and wide discussing her platform and being a model ambassador representing Shelby County.

Clubwomen honored for years of service